Skip to content
Well people, April is coming to a close which means this is the last post in my Musical Instrument Mondays Series. For the past four weeks, I have been posting something about a different musical instrument each week, and that usually went along with a regular post the same day. For the last week, I wanted to focus on ethnic woodwinds (not just those in the pictures). I also knew that I wanted to write one post so that I could focus on ethnic woodwinds as a whole.
I have always been intrigued by ethnic instruments of all kinds. I love how some of them don’t even follow the western scale. I believe the instruments in the picture are from Peru, but I don’t know much about Peruvian instruments, so I am going to write about what I do know.
I own a few various ethnic instruments. I have two ethnic strings and three ethnic woodwinds. For the strings, I have a ukulele, of course, and an Appalachian dulcimer, which is a string instrument that you rest on your lap and it is tuned to a weird scale. For woodwinds, I have a recorder, an Irish penny whistle, and a Native American flute.
I don’t get to play my ethnics very often, but I really enjoy getting to play them. I got my first recorder from a childrens’ toy store. It was translucent purple, but it didn’t play well. I still have it, but I don’t play that one anymore because I now have a professional plastic recorder made by Yamaha. I currently only own a soprano, but I would love to acquire an alto and possibly some other sizes as well.
I recently started playing the penny whistle when I got two on my trip to the Musical Instrument Museum (the trip that inspired this mini-series). I bought two because I thought they were in different keys, but even though they are the same key, I don’t regret buying both because they have different tones.
I got my one and only Native American flute from my grandma after she passed away. She is also where I got the dulcimer that I have. I don’t play the NA flute as much as the other ethnics because I have not been able to figure out what key it’s in or how to play it. When I do pull it out of its protective bag, I usually just mess around.
Thanks for reading! Comment below if you want me to do more mini-series like this!
I hope you enjoyed!
Here is a picture of the display of ethnic woodwinds at the museum: 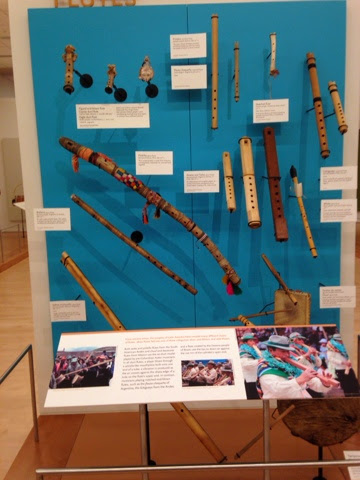