Today is a sad day for flutists young and old, near and far. It was revealed to many that the well known and well respected flutist and professor, Dr. Brad Garner, has been accused of sexual harassment and assault. 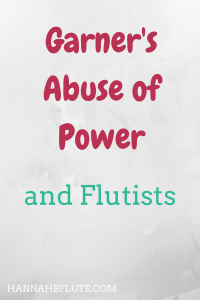 Garner taught at University of Cincinnati, and he basically built the flute program from scratch.

But he used his power and authority to manipulate and harass students for over two decades.

In this special, extra post, I will be discussing the issue as well as my thoughts on sexual assault and the vulnerability of young flute students.

Garner is most know for being the first flutist to receive a doctoral degree (DMA) in flute from Juilliard. Until last December, he was the flute professor at University fo Cincinnati.

He is also know for being a headjoint maker, with his company Garner headjoints.

Garner has played with the New York Philharmonic and the Cincinnati Symphony Orchestra. He has performed in venues such as Carnegie Hall and Lincoln Center as well as around the world.

He is a very prolific flutist. But that doesn’t give him the right to abuse that power and status.

Garner used his power to scare students. If a student spoke out about his abuse, he had the power to stunt their career growth. He could assign them the “bad” parts in orchestra. He could use (or refuse to use) his contacts to get auditions for his students.

This case parallels that of Larry Nassar, the famous doctor of Olympic gymnasts who was recently sentenced for up to 100+ years in prison for sexual abuse.

If you know anything about that case, simply change the word “gymnastics” to “flute studio.”

We cannot let anyone else get away with something like this. Garner deserves a similar sentence to Nassar.

According to the Daily Mail, Garner would inappropriately touch his female students. He would send them explicit photos, and he would even record his sexual interactions with students.

One student claimed he smacked her butt when she bent down to pick up her flute.

Garner has responded to the allegations as a “witch hunt.” He has denied all allegations.

One student told the Cincinnati Enquirer that if you were on Garner’s bad side, he had the power to destroy your career.

All of this, and possibly more. It’s disgusting.

Again, I think it is disgusting.

Anyone in a position of power should know better than to use that power to control others. Be it students, employees, or otherwise.

Support others. If someone confides in you about being abused, listen to them. Believe them. Help them.

Spread the word about Garner’s heinous acts. He deserves to have his reputation tarnished.

Actually, he deserves more than that. He deserves to pay for what he did to who knows how many students.

Even though I don’t normally post on Wednesdays, I could not stay silent about this issue.

Please, share this article as well as this one in the Cincinnati Enquirer.

We will never forget this.