As flutists and other woodwind players know, you can’t always get away with playing just one instrument. Especially for music majors and professionals, the benefits of doubling are numerous. 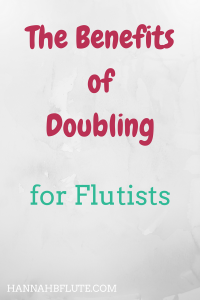 Playing a second instrument can help you get more performing and teaching gigs. It can get your foot in the door with other musicians. And it can even help improve your playing on your main instrument.

Today, we are going to talk about the benefits of doubling that flutists should know about, as well as the different types.

To me, there are two main types of doubling. There is primary to primary doubling and primary to secondary doubling. Bret Pimentel has an amazing post for flutists who want to double, and that is where I learned this terminology.

Basically, primary to primary doubling is when a flutist decides to learn an instrument outside of the flute family. It could be saxophone, clarinet, piano, etc. It just can’t be another flute.

Primary to secondary doubling is when a flutist learns another type of flute. That could be piccolo, alto flute, or even flutes from other parts of the world.

The type of doubling that is best for you depends on your goals. Do you want to play in a big band or a musical theatre pit? Try saxophone or clarinet. Would you prefer to play in a symphony or opera orchestra? Then learn piccolo or alto flute.

Primary to secondary doubling will be slightly easier, because the technique for flutes is fairly similar. The embouchure changes only slightly.

Primary to primary doubling requires the player to learn a whole new instrument. You almost have to forget that you are a flute player.

I started music when I was 5 or 6, but I didn’t really start with woodwinds until age 14. At that time, I learned the saxophone. Flute came soon after, because I wanted more opportunities within the classical music scene. I wasn’t a huge fan of jazz.

Eventually, I decided that doubling between families took too much time away from what I really wanted. So, I settled on the flute family.

As mentioned, there are times where primary to primary doubling is perfect. But for the remainder of this post, I will be focusing on primary to secondary doubling for flutists.

Piccolo is the most commonly asked for double in almost all situations. Whether you play in an orchestra or band, you will probably be called upon to play piccolo at some point. If you are an amateur player, though, it may not be as necessary.

For the career bound flutist, it is EXTREMELY difficult to have a career on flute that doesn’t include piccolo. It is possible, but rare.

Being able to play piccolo at least a little bit will help you a lot. It means you can audition for jobs that involve piccolo. You can take on advancing flute students who want to learn piccolo. So try to treat the piccolo as an extension of the flute.

Should You Play Alto Flute?

The alto flute is not quite as common as piccolo, but its use is growing. More flute choirs are popping up, and more flute players, pro and amateur, are buying alto flutes.

Modern composers are starting to write more and more for the alto flute. That combined with flute choirs means that the opportunities for playing and teaching the alto flute are increasing.

The alto flute will continue to become more important to flute playing. Its use in orchestras is limited, but that may change in the near future. From solo and chamber playing to teaching, the alto flute has many venues now.

If you are looking to expand downwards in the flute family, try the alto flute. Alto flute resources are limited, but Chris Potter has an amazing website for alto (and bass) flute. If the alto flute interests you, go check it out.

The alto flute is a little more complicated than piccolo, since it has two headjoint options. Other than that, it is an easy transition for most advanced flutists.

The Benefits of Doubling Flutes

I have found that piccolo and alto flute both help my flute playing in different ways. The piccolo helps me get better control in the high register. Playing alto flute helps better my air support.

Other benefits of doubling include marketability and access to more repertoire.

Marketability pertains to more than just professional musicians. If you play flute and piccolo, you will be able join more ensembles and competitions than if you only played flute.

Maybe your local band is full of flute players but no one likes the piccolo. If you can play piccolo well, you might just get your foot int he door.

The alto flute is similar. If your community has a smaller flute choir, they might need alto flute players. The group might be overflowing with C flutes. If you show up with an alto flute, you will have a better chance of joining the group.

There are many benefits of doubling that flutists can take advantage of. Even if you just add piccolo to your routine, you will be able to play a lot of different music, and it can help your flute playing.

Be sure to subscribe below to get your free guide to practicing as a doubler.

Do you play multiple flutes? Which ones? Leave a comment below with your answer!