Imagine this. You’re in orchestra rehearsal and you have a tricky passage coming up. Or even worse. You have a long held C sharp. So, you bust out your knowledge of alternate fingerings for flute. 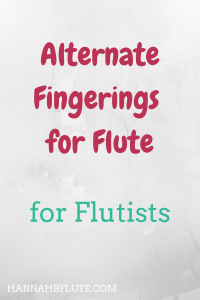 Whether they help with intonation or just make playing a phrase easier, alternate fingerings can help a lot.

What are alternate fingerings?

Alternate fingerings are like the fingerings you learned as a beginner, but they are super helpful with advanced music.

Some fingerings involve closing extra keys or switching the keys that you do switch. Finally, some alternate fingerings actually allow you to close fewer keys and still produce the pitch you need.

Who should know them?

When do you use them?

The other main purpose for alternate fingerings is to make a fast passage easier to play. For example, first and second octave Bb (or A#) has three different fingerings.

Do all notes have alternate fingerings?

The short answer to that is no. Just think about low C on the flute. If you have a C footjoint, you’re closing every single key. There’s only one way to do that.

But as you get to the high register on flute, you’ll find quite a few alternate fingerings.

While quite a few notes have alternate fingerings, I’m going to focus on the most common ones.

A while back, I wrote specifically about the three B flat fingerings for the flute. If you want to know more about those fingerings, you can check out that post.

Lastly, you can find a little side lever to the left of your right hand index finger. If you play a B natural and add the lever, you’ll hear a B flat.

The reason for these fingerings is that the main one can have some intonation issues and it’s not great for fast passages. The thumb B flat is great when you have a piece without B naturals.

If you have to go between B natural and B flat, the lever is easier and more in tune.

You can make things easier on yourself by using the right hand middle finger instead of the ring finger. That small change can help with tuning. It also makes switching between E natural and F sharp a breeze.

If you’re coming from clarinet or saxophone, it can be tempting to use the middle finger, because that’s how those instruments work. But don’t fall for that trap.

Another awful note on the flute is second and third octave C# (or Db). That’s because essentially every key is open. That means the note has little resistance, and the intonation can be really unstable.

To help this, you can add one or more fingers on your right hand. That can adjust the pitch and make the note feel better to play. You’ll have to experiment with different finger combinations to find what works with you and your flute.

Flute shopping tip: If you’re shopping for a new flute, consider a C# trill key. The key can make trilling to C# easier. But it can also help with tuning when you have a sustained C# or Db.

2 thoughts on “Alternate Fingerings for Flute”