Are you thinking about majoring in music? Music can be an excellent degree, and you can learn a lot. But it’s definitely not for everyone. 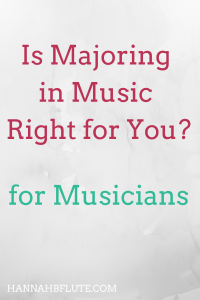 Majoring in music requires a lot of time and energy that other degrees don’t require. You may have to miss out on other fun college experiences. For many music majors, those sacrifices end up being worth it.

Is Majoring in Music Easy?

A lot of people may think that majoring in music just involves playing music all day. While that’s somewhat true, there’s a lot more to it than that.

As a music major, you do get to be around music all day. But you’ll have a lot more to do than go to band or choir rehearsal. Majoring in music is not as easy as it may seem.

Music majors have a lot to juggle, from ensembles to private lessons to general education classes. Not to mention that you also have to take a variety of different music-related classes that may not involve your main instrument.

Most undergraduate music majors have to take about four semesters or two years worth of music theory and aural skills courses. Some schools combine the two subjects, while other schools separate them. Although, you would probably have to take the two separate classes during the same semester.

Music theory involves studying written music. Once you go through a music theory curriculum, you should know how to read treble and bass clefs.

You should be able to recognize key signatures and time signatures, and you should also know how to write small four-part harmony exercises. Some advanced theory classes even include some music theory analysis.

On the other hand, aural skills covers the audible part of music. In these classes, you’ll learn how to detect intervals and chords by ear. You’ll also have to learn how to sing said intervals.

Most colleges offer a music appreciation class as a general education requirement. Well, music history takes that a bit further. Music history is typically split into two semesters so that you can go deep into the different eras.

In a music history class, you’ll learn about the music of the past. You might start as far back as Ancient Greece. The first semester will typically go through the Baroque period.

In the second semester, you’ll cover information from the Classical period through the 20th century.

When majoring in music, you will most likely have some sort of concentration within music. That can be anything from performance to education to music technology.

As part of your degree, you’ll have to take some classes within your specific field of music. For performance majors, that means private lessons and ensembles.

Other areas of concentration include music composition, music theory, and music therapy.

Music majors have to work hard, and there are no guarantees of a career in music after graduation. That can be stressful, but for many of us, majoring in music is worth the hard work.

Majoring in music shouldn’t be done for fun. The decision to study music in college is a big one, and you shouldn’t take it lightly.

You have to sacrifice

While in undergrad, I made friends with people who weren’t music majors. I loved having friends outside of my majors, but they didn’t have the same commitments I did.

That meant there were times when my friends were able to hang out when I had to go practice. There were weekends where I would have lunch with them. But while they walked back to the dorm, I walked to the music building to go practice.

I wasn’t much of a partier. But if I was, I would have had to miss out on some parties for concerts and events.

Fast forward to after graduation, and you’ll realize that music is a tough industry. It can be hard, if not impossible, to land a music job after you graduate.

Now that I’m in my masters, I’m taking full advantage and working to build my career while I’m still in school. That way, I’ll hopefully have something in the works for when I graduate.

Majoring in music means being a little flexible with the work you want. While I would love to make performing the center of my career, I know I also have to teach and do other things. That way, I can round out my income while I build up the performance side.

Passion is all you have

Before majoring in music, you have to figure out where music lies in your life. As a music major, you have to have a huge passion for what you do.

Sometimes, your love of music will be all you have. As you face rejection when building your career, you may want to give up.

While that may be the right decision for some people, your passion should be able to carry you through those dark times.

Is majoring in music right for you? That’s up for you to decide. Music is a tough degree and an even tougher professional field. You have to have the passion and the desire to pursue a music career.

Are you a music major? What do you think about the degree? Share your thoughts in the comments!