Many people would love to learn to play the flute, but it can be expensive. Luckily, there’s a Yamaha flute that’s more affordable and easier to start. 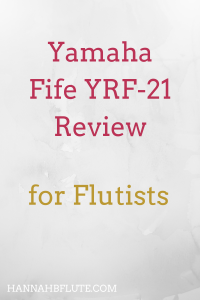 The Yamaha fife is an excellent alternative to the flute for beginners, younger students, and anyone on a budget. It’s also a great way to expand your flute playing outside of the concert flute family.

Do you want to learn more about this flute? Keep on reading or watch the video to hear how it sounds.

But first a quick note: this post contains affiliate links. You can read my full disclosure policy for more.

Yamaha is probably one of the most popular flute brands, from beginner to professional instruments. They also have tons of different flutes, like piccolos, alto, and bass flutes.

So it makes sense that they would have other flutes that don’t fall into the concert flute family. That brings us to the Yamaha fife!

The Yamaha fife is a plastic instrument with no keys but eight holes. It has an embouchure hole like your average flute or piccolo.

However, the embouchure hole is a bit bigger than that of a piccolo. But the body is closer in size to a piccolo than a flute.

Whether you already play flute or not, you can start learning the fife! This Yamaha flute isn’t like the “real” fife because it’s plastic and it is supposed to be an alternative to a flute or piccolo.

It’s easier to start on than the flute or piccolo because the embouchure hole is more forgiving. The instrument is smaller than your average flute, and at less than $20 on Amazon, it’s much more affordable.

How does it play?

An important part of any Yamaha flute is how it feels to play. The fife is easy to get a sound on since it’s more forgiving than your average flute or piccolo.

For a plastic instrument, it actually sounds pretty good. I can play a two-octave C major scale, and it doesn’t sound too strident or harsh.

However, it can be hard for me to close the holes. After all, I’m used to playing an instrument with keys, so I don’t always have to be as precise.

How much does it cost?

As I mentioned, you can buy the fife for less than $20 on Amazon. Compared to a beginner Yamaha flute that costs a few hundred dollars.

Whether you’re new to playing the flute or you don’t know if your child will stick with it, it’s a great option.

How to Play the Yamaha Flute YRF-21

Playing this instrument is similar to playing a regular Yamaha flute. You have to blow across the embouchure hole to make a sound. To change the notes, you can close or open different holes.

As with any Yamaha flute, you form your embouchure by creating a small hole between your lips and blowing. You have to blow air both across and down into the embouchure hole.

Luckily, the fife has wings on the sides of the hole, which can help you direct the air correctly. The embouchure hole is a nice size for beginners, so you don’t have to be as precise as if you played the piccolo.

Getting the basic fingerings

Probably the easiest note to get on the fife is C. You close the first hole with the first finger of your left hand, and the rest are open. Add the thumb to get the note B. Continue adding fingers one at a time to go down the C major scale.

Have you ever thought about playing a Yamaha flute? What about this fife? And are you looking to learn to play the flute or fife online?

Join the lesson studio, where I offer private live and recorded lessons on flute, fife, piccolo, and alto flute!

Can’t afford lessons? You can sign up below to receive my Ultimate Guide to Learning Flute Online! 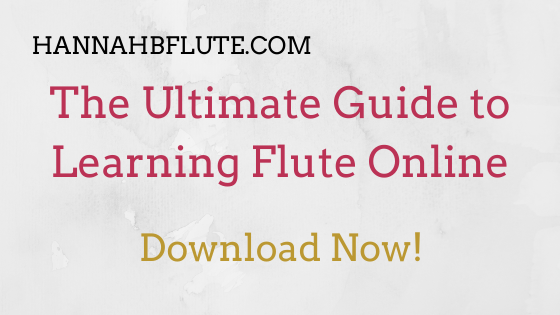