Skip to content
So for this blog post, I wanted to show you guys the apps that I have in my music folder on my iPad. My music folder looks different from what some people would have because I have more music creation apps whereas other people might have more music listening apps. Be fore getting into the post. So here are some apps that you will find in the music folder of my iPad.
GARAGE BAND ($4.99-free on devices purchased after 10/01/13) I don’t really use this app that much. I mostly just mess around with it. You can create and record music on piano, guitar, bass, and drums as well as record audio. 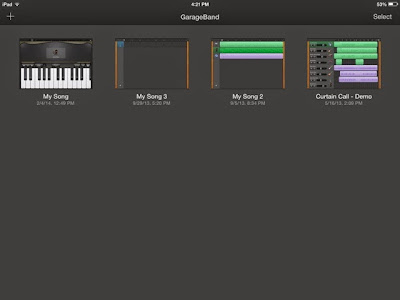 EAR TRAINER LITE (Free) I use this app whenever I want to sharpen my ear at hearing intervals. Since I am a music major, I have to take aural skills so this app can be a great practice tool for outside class time. 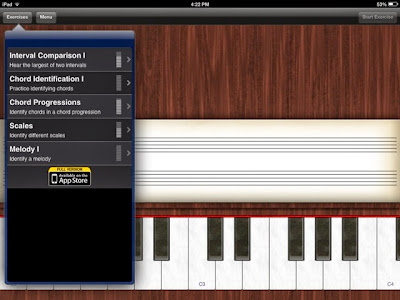 FINALE SONGBOOK (Free) I love this app for storing digital copies of all of my sheet music. It was made to store files from Finale music, but I also will open PDF files of sheet music in there. This app is just for viewing-not creating or editing sheet music. 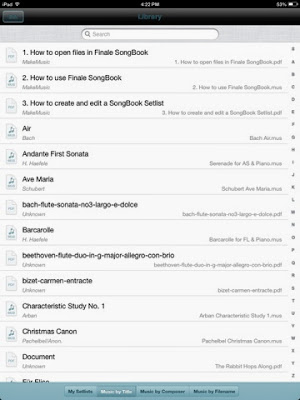 50-in-1 PIANO HD (Free) This is an electronic keyboard app where you can select different sounds from vibes to strings to synths, it is a fun app. I don’t use it all that much but it is nice to have. 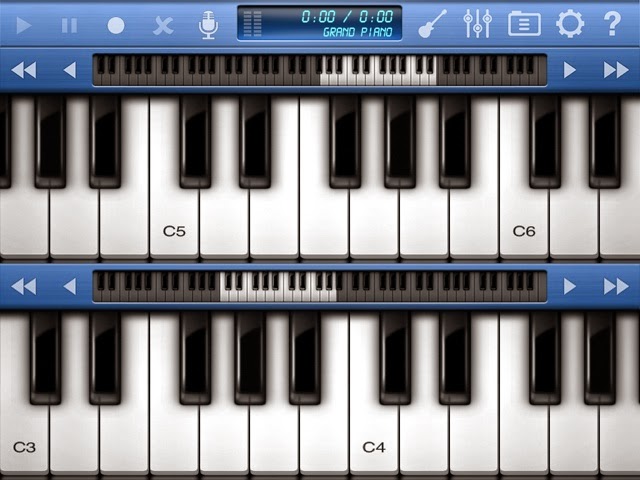 iGRAND PIANO ($?-free with purchase of iRig Keys ($99.99)) this is a simple electronic piano app that I use with an external midi keyboard. 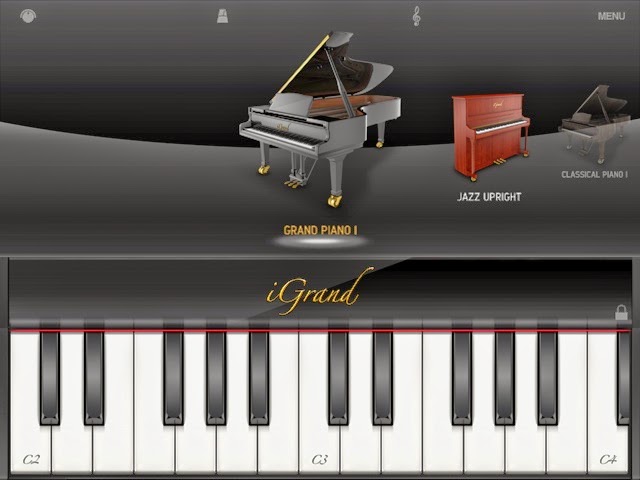 SAMPLETANK ($?-free with iRig Keys) this is like the iGrand Piano app, but you can also use other sounds besides piano. This app is also meant to be used with an external midi keyboard. 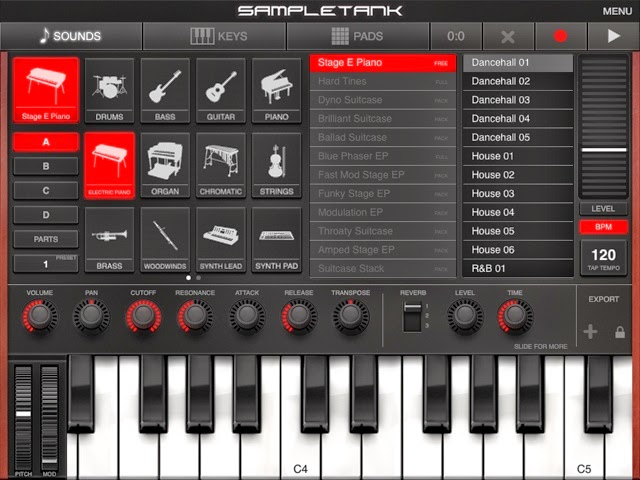 NOTE* The two apps I just talked about came with the iRig Keys (made specifically for use with iOS) which I bought at Guitar Center. I can do a review of the keyboard in another blog if you would like-comment below.
MAGIC PIANO (Free) This is a cute little app that is kind of like guitar hero, but you use your fingers on the screen to play the notes in all sorts of songs. I believe it costs money if you want to play pop songs (they are an in-app purchase). 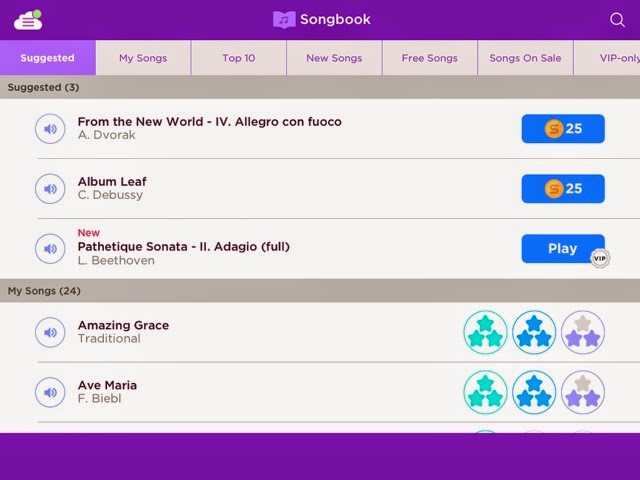 SYMPHONY PRO ($9.99) I have been loving this app so much! It is a music composition app that functions just like Finale or Sibelius, but way cheaper. I just recently downloaded it, so I am still getting used to the program, but so far I really like it. I was able to do a project for my composition class on it. I really love the option to use an on-screen keyboard for note-entry. 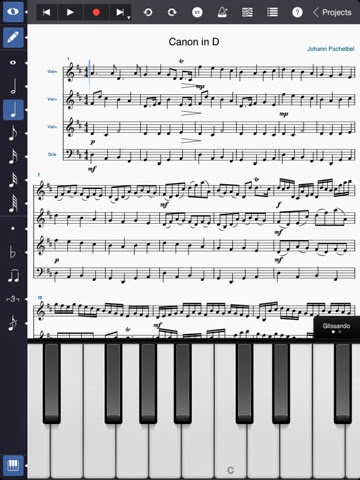 So, those are my top music creation apps for iPad. I hope this gave you an idea of what is out there. I believe they are also available for iPhone/iPod Touch except for maybe Finale SongBook. I would like to know about other fun apps like these that are free/cheap, because I do use my iPad as my main computer. If you would like to know how I do that, let me know, and I can show you! Anyway, thanks for reading!
Most parents know exactly where their kids will be going to high school as soon as the child is born or when they move to a new area. My parents were examples of these people. Especially since my mom grew up a block away from where we live now, she thought I would end up at the high school she attended… And that’s what I thought, too, until the eighth grade that is. I was at a big public school with probably 600 students, and for a while, I was content in that environment. But I was never like most of the girls there. I didn’t wear skinny jeans and ballet flats (uggs in colder weather), I LOVED wearing sweatpants. This and other parts of me made me an easy target for bullies. It got to the point where a boy thought it would be funny to almost lick my desk! I hated being there so much that I would get stress headaches and on the days where that didn’t happen, I would fake sick so I could leave early.
One day, in November of 2008, I got a postcard in the mail from a parochial school a few miles away. I thought it looked interesting and it got me thinking that there were other schools I could go to besides Big Random Public High. About six weeks later, two things happened. First, I took the High School Placement Test which was required for admission to any area parochial school. The second thing that happened was my mom read in article in the newspaper about a VERY small school (<80 people) that sounded like a possible fit for me. A couple weeks later, I visited  the school and it was amazing! I loved every minute of my shadow day. I applied and was soon accepted to my new dream school!
The first week of March I had decided that I had had enough of this big school and I wanted to transfer early since my high school was also a middle school. My parents contacted the school and they gave us the okay to enroll after spring break.
My first day was amazing. The middle school had only 9 other students, so I was able to fit in pretty easily. The decision to transfer early was the best decision I made because it finalized my decision to spend the next four years of my life there. I even got to have a couple of pieces of art shown in a school art show!
Freshman year was a breeze. My favorite class from that year would probably have to be a tie between Biology 1 & Spanish 2. I really enjoyed all of my classes. The small environment was perfect for me, and it felt like an actual community. We also got to know our teachers a little better due to calling them by their first names. And each subject was taught by only one or two people. That meant having the same math teacher all through high school.
Sophomore year rolled around, and to be honest, it was nothing special other than the fact that we started researching colleges… That was the year I was given the nickname Falafel. It wasn’t because I had some weird obsession with it, my history teacher just thought my last name looked like the word Falafel.
Junior year was interesting. The college search really started getting speed, we even had a field trip to visit a few area colleges. I also had the privilege of driving to school since I had finally turned 16. That was also the year where I got to write a play that my school put on in the spring.
Senior year, I had a pretty good schedule. I was part-time, so I got to take some college classes. I took those classes online, and I only had to be at school at 8:30 twice a week first semester, and I only had afternoon classes second semester (a teenager’s dream). Second semester was also when I started my first “real” job, which I still have as I am writing this. In May of 2013, I graduated as a member of a class of eight people, which was crazy, but it was nice having a ceremony that didn’t last three hours.
I still love my old high school, and I know that I would not have been happy at any other school, at least not AS happy. I really enjoyed my time there, and while I was sad when my time there came to an end, I knew that I could always come & visit.
Sorry for the lengthy post, but I thought it would possibly be interesting, and maybe helpful to someone who is considering attending a different kind of high school.

I want to have a small series of posts that will be going up over the course of April where I post a picture of a musical instrument and then a little background.

I decided to first post about the toy piano. There is a company called Schoenhut (http://www.toypiano.com) that makes all kinds of toy pianos as well as a toy harp that you can actually buy (as long as you sign up) I was fortunate enough to be able to visit the Musical Instrument Museum (MIM) in Arizona recently where I saw one of these fine instruments. I have also had the experience of playing around with one because the music director at the school where I went to high school had a toy piano. My friend also had one when we were growing up.
I think that toy pianos are the cutest things! They are so small, and they are also a good idea if you want to try to learn piano, but do not have the money to purchase a full-sized piano/keyboard.
Here is a picture of the toy piano I saw at the MIM: 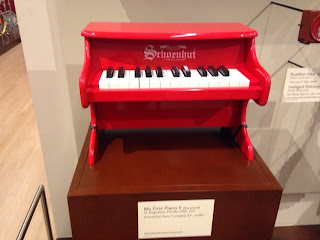 For this blog post, I wanted to review one of my favorite prices of gear: my compact flute stand! I bought this stand off of Amazon awhile ago and I have been loving it ever since!
Here is the link to where I got it:
http://www.amazon.com/gp/aw/d/B0035FZMTG
I will put some pictures of the stand at the bottom.
This stand is awesome because the stand folds up and fits right inside the foot joint: C-foot or B-foot. That means it doesn’t take up any extra room in your flute case! The stand comes with instructions on how to open it, but after the first time, it becomes almost intuitive.
I love using this stand when I am at school in a practice room or in band class, that way, I don’t have to worry about setting my flute down in a place where it could fall or get damaged.
I also like the fact that it doesn’t take up any extra room in my flute case since it fits perfectly in the foot-joint. I also like how I don’t have to worry about it scratching the inside of the foot-joint because the legs are covered in a leather-like material. The legs also can extend a little so that there is more stability. ( I have found that since the flute is so small and light, I never need to extend the legs out)
If there is one thing that is wrong with it, that would be the fact that one of the legs is a little loose when setting up and taking down the stand (but it is fine when it is all put together).
My Rating: 4.5/5 stars
Have you tried this stand? What are your thoughts on it? What product or type of product should I review next? Let me know in the comments!
Thanks for reading! 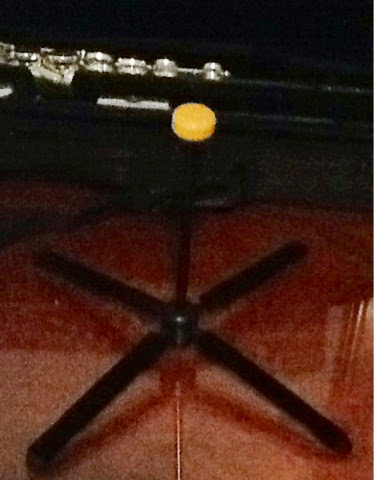 Stand (folded up for storage)