The piccolo can be a pretty polarizing instrument. Some people love it, while others despise it. However, combining earplugs and piccolo can make the instrument more enjoyable to play or listen to. 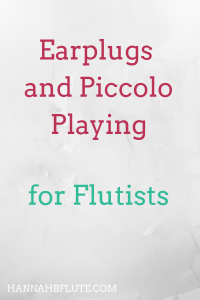 While earplugs aren’t always necessary, they can also save you from some preventable hearing damage. Should you wear earplugs?

I love playing piccolo. I’ve said this multiple times across this blog and my social media profiles. If you know me in real life, you might have heard me play piccolo.

However, at least for me, earplugs and piccolo go hand in hand. As much as I love floating on top of the orchestra or playing solo, good hearing is essential for musicians.

I want to protect my hearing while I’m still young and while I still have it. But that’s not to say I ALWAYS combine earplugs and piccolo playing.

To better explain why earplugs and piccolo piccolo playing mix well, let’s explore the range of the concert flute.

The flute’s range typically starts at middle C (C4 in scientific pitch notation) or the B just below that (B3). It extends about three octaves up to C7 or D7, though you can play even higher.

As a flute performance major, I had to play up to D7. But the flute can play as high as E7 or F7.

Those super high fingerings can be difficult to remember, and they’re not very common.

Now for the piccolo range, which is (for the most part) relative to the flute range. The piccolo is sometimes considered a transposing instrument since the note you see on the page isn’t what you hear.

Instead, the C piccolo we play today sounds an octave higher than written. But what’s its written range?

The lowest written note for most piccolos is the D just above middle C (or D4). However, the note that comes out is an octave higher, or D5.

And you can play up to a written C7 (sounding C8) on the piccolo. That’s the highest note on the piano.

I think we all know the piccolo is in a high range. That’s why a lot of flute players never want to deal with the piccolo. (More for me, I guess :D)

But the piccolo’s size (and its proximity to your right ear) is another thing. Because of its high range, the piccolo is very small.

Just compare a tuba to a trumpet. The tuba plays lower and is much larger. On the other hand, the trumpet is smaller and plays higher.

Hence why the piccolo is as small as it is.

But why can you play high notes on flute and feel fine, but playing those same pitches on piccolo makes your ears ring?

The piccolo is that much closer to your right ear, so the sound waves reach your ear faster, and the sound is more intense. I’m not a physicist, but that’s my basic understanding of how it all works.

The use of earplugs and piccolo playing isn’t always necessary, but it can be a useful tool for extending your piccolo practice and saving your ears.

Earplugs and piccolo playing aren’t always one and the same. But there are some reasons why you may want to wear earplugs.

Tinnitus and other issues

Tinnitus is where you hear ringing in your ears. It can be constant, or it can come and go. It’s not a condition, but it can be a symptom of hearing loss or another condition.

I’m not a medical professional, so if you have ringing in your ears, you should consult with a doctor.

Still, if you can prevent tinnitus, you should. Exposure to loud noises is one of the most common causes of tinnitus.

And because of how close the piccolo is to your ear, it can be pretty loud, especially in the third octave.

According to the World Health Organization (WHO), about half or more cases of hearing loss could have been prevented. And like how loud noises can cause tinnitus, they can also cause hearing loss.

You’ve probably heard you should stop listening to music at the highest volume. Well, the same is true for playing music.

Of course, you can’t control how loud you or others play. Sometimes you have a loud passage.

However, you can use some form of protection to lower your risk of damaging your hearing.

Earplugs and piccolo playing don’t always have to work together, but they’re a great pair. You can find tons of different earplugs online.

Some block out all sounds, while others filter out a certain amount of decibels.

And while some earplugs are hard to wear, others are very comfortable. They’re also small, and many can fit in your flute bag.

Some earplugs are also very affordable, though you can invest in a custom pair after a visit to the ear doctor.

While combining earplugs and piccolo playing can be a smart decision, that’s not always the case. (I know, shocking…)

If you have a long rehearsal or concert, earplugs are beneficial. You can take the earplugs out when the conductor has to give comments.

Or you can get a special pair that allows you to still hear people talk.

You should also wear one or both earplugs when you’re working in the high register. That’s especially true if you plan to practice high notes for an extended period.

Another situation where you might want to wear earplugs (piccolo or not) is if you’re in an ensemble and you’re right in front of the trumpets or saxophones.

Those instruments can get loud, and you want to protect your hearing, right?

Lately, I’ve actually found myself wearing earplugs less and less, though I still wear them regularly. And that’s because I’ve realized that there are some occasions where earplugs can hurt you.

If I’m practicing the low register, especially if it’s for tone, I leave my earplugs out. I want to hear the tone quality so I can make adjustments.

Even in the second octave, removing my earplugs can give me a better sense of my tone and intonation. And we all know that intonation on the piccolo can be a hit or miss.

And while earplugs and piccolo playing in orchestra is almost always a no-brainer, that’s not the case with every ensemble.

One of ensemble pieces I’m working on doesn’t go above written D6 (just above the staff). And this particular piece requires a lot of listening to myself and other players.

So, I haven’t used earplugs. That way, I can hear myself better, and I can listen to what’s happening around me.

Earplugs and piccolo playing can be beneficial. But that may not always be the case. I sometimes wear earplugs, but not always.

Do you ever wear earplugs? Share your thoughts in the comments!