This past weekend has been a whirlwind of emotions for American women. The passing of Ruth Bader Ginsburg should light a fire in us, and that fire should extend to our musical pursuits. One way to do that? Learn about female composers. 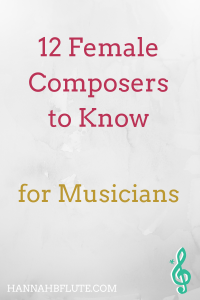 While male composers have been more popular throughout history, women are just as capable of writing great music. These female composers are just the beginning.

Keep reading to learn more about female composers through history and today.

A Brief History of Female Composers

If you know anything about history and women’s rights, you probably won’t be surprised that female composers haven’t been very popular until recently. While women have been composers for centuries, their work was often trivialized or thought of as a hobby.

Because of this, there may be plenty of women who wrote fantastic works. But we may not know about them.

In some cases, we may know about the works, but we may not know who actually composed them. What’s more, some works by women may even have been attributed to men close to them.

Other women published works using only their first initial and last name to hide their gender. It’s a sad thing to think about now, but when you think about it, it’s not that shocking.

Now, more women are able to compose and arrange music. It’s become more socially acceptable for women to make money from composing and music in general.

However, the situation isn’t perfect. I know in my experience, the vast majority of works I’ve studied or performed were composed by men.

It will take a long time and a lot of female composers to attempt to make things equal. But that doesn’t mean we shouldn’t try.

Whether you’re looking for some new music to play or a new composer to listen to, you should consider some female composers. Of course, men can compose music well.

But you should familiarize yourself with more composers. Even if you don’t like a particular composer’s works, here are 11 female composers you should know about.

Hildegard von Bingen was a saint in the Catholic church, but she was also a composer and poet. She wrote a lot of vocal music, and her works are mostly sacred in nature.

The composer didn’t have formal training, but she did claim to have visions that inspired her work. Some scholars and scientists believed migraines could have caused said visions.

A composer I only learned of recently, Anna Bon di Venezia lived in Italy during the Baroque Era. Her first published work is a set of six sonatas for flute, and she also wrote six sonatas for harpsichord.

Flute players should also check out the Trio Sonatas that Anna Bon wrote. She didn’t write a ton of music, but the music she did write is reminiscent of the time.

Barbara Strozzi was another Baroque female composer, and she was also a singer. She wrote eight song collections, and she was more prolific than other composers of the time.

Strozzi was also a performer, and she grew up in an artistic family. Her father was part of a group of musicians whose work led to the development of opera and musical theatre.

Before birth, the parents of Clara Schumann (nee Wieck) knew she would become a musician. She performed on various instruments and composed multiple works.

Clara married Robert Schumann after he came to study with Clara’s father, who was a music teacher. Both worked as composers and performers, and Clara later started editing Robert’s works.

Fanny Mendelssohn is the sister of the famous Felix Mendelssohn. The siblings received nearly identical musical training in childhood, and Fanny later became a sort of advisor to Felix.

Fanny wrote about 500 works for voice, piano, and chamber ensembles. Some of her songs were attributed to Felix, and the two had similar compositional styles.

Flutists probably think one of three things when they hear the name Cecile Chaminade. Many flute players love or hate the famous Concertino, but some flutists may not know the composer.

Chaminade wrote a lot of piano works, and her Concertino for flute is one of the most famous flute works. Americans fell in love with her music, and she often published works as C. Chaminade to hide that she was a woman.

Nadia Boulanger grew up in France and studied at the Paris Conservatory. She moved to the United States, and she taught many students who would later become famous composers.

Her students include Elliot Carter, Martin Amlin, and Robert La Montaine, all of whom have written music for flute. While Boulanger’s works aren’t as famous, she made a huge impact on the classical music world.

She has written many empowering works, such as Fanfare for the Uncommon Woman. Her piece Made in America features snippets of the melody from America the Beautiful.

Julia Wolfe is another living, American composer. She has written award-winning works, and she is part of Bang on a Can, a group that aims to further contemporary classical music.

Her works have been premiered by musicians all over the world. Each year, she has written many new works, and her music has a lot of influence from popular culture.

If you want to listen to some music from female composers of color, check out Valerie Coleman. She is a composer and flutist, and she helped found the wind quintet Imani Winds.

Coleman currently teaches music at the Frost School of Music at the University of Miami. She has written works for different instrumentations, and there are plenty of options for flute players.

Nicole Chamberlain is another flutist-composer, and she’s active in both areas. She writes a lot of music for flute, but she also composes for other instruments.

Her flute music involves a lot of extended techniques, such as beatbox flute and tongue rams. I’ve played her pieces Ruckus, for flute choir, and Death Whistle, for solo piccolo, and both are super fun.

Another excellent female composer is Binnette Lipper. I first discovered her and her music after browsing for sheet music at a local music shop. The piece I found was titled Four Glimpses of Night, for solo flute.

She wrote many works for different instruments and chamber groups. Even if you don’t play the flute, you should check out her works to find something you enjoy.

Knowing about female composers is excellent. But that’s the first step to working toward a more gender-equal world of classical music.

Listen to their works. Play them if they have pieces for your instrument. Assign them to your students when appropriate. Put their pieces on recitals, either for female composers or a general performance.

Did you know any of these female composers? Share this article with your friends to spread the word!