So, you want to make some money online, and you think that filling out surveys might be a good choice. I’ve done it, and I think a lot of people who want to work from home try survey sites at one point or another, and I want to tell you to not waste your time. Surveys take time to fill out, even if it’s only five or ten minutes, that’s still something. And for a survey that will only pay 50 cents maybe a dollar if you’re lucky, that’s not a good wage. 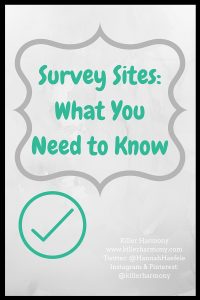 Over this past winter break, I tried to make money from survey sites. I signed up for Opinion Outpost and Swagbucks which are the two biggest sites that I know of. It seemed like a good deal at first. I could make some easy cash doing stuff that I already knew about. People would PAY me to give my opinion!

The thing about these sites is that they make it seem so easy. They tell you that you will probably qualify for quite a few surveys and that you can earn a decent amount of money. Well, that is true…for like the first hour of using the site. After I joined these sites, I qualified for quite a few surveys, and I continued to get emails about surveys I qualified for, but the thing is, I would get booted out of surveys despite “qualifying” for them. Not cool. This happened when there were already enough people from my demographic who took the survey, which is fine. Just tell me that before I fill out an entire survey only to not get paid for it.

I was wasting my precious time attempting to make just a little bit of money trying to find a survey I would qualify for. And the thing is, there was always a limit on the surveys that I could do at one time. It seemed like I was constantly hitting the limit. I did manage to make enough money to cash out on Opinion Outpost, but not enough for Swagbucks.

These survey sites seem to be more catered to stay at home moms, or at least the surveys I was given. They had questions about home ownership, cleaning products, cars, family stuff. Nothing really related to millennials. That’s fine, as I would rather make more money with my time.

Personally, I value my time much higher than $3-6 an hour which is what you might make if you qualified for ever survey you did. If you are a stay at home parent or need some extra money, surveys would be a great choice, but as I work towards starting a business and career, I have to know how much I value my time. I value an hour at least triple what surveys would pay…if not more.

Please don’t under value yourself or your time. The internet is filled with ways to make money, more than what survey sites pay. I can’t recommend survey sites as a money maker, because they aren’t. You can make some easy money for a nice weekly treat, but it is not enough to consider it a job. It’s a lot more work than what it’s worth. Don’t waste your time.

If you do want to make money online, there are better ways to do it.
Have you tried survey sites before? Tell me your experience in the comments or on Twitter at @HannahHaefele.
Thanks for reading!

2 thoughts on “Survey Sites: What You Need to Know”