Before starting this post, I want to make a disclaimer that I do not have a disability. I’m merely writing this post to share with you all my thoughts on the book and the trailers and previews of the movie. I am in no way trying to dehumanize people with any type of disability. 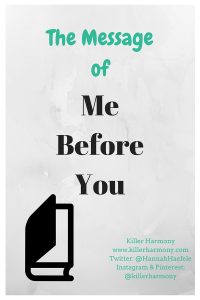 So, you have probably heard of the newest book-turned-movie “Me Before You.” The book was written by the British author, Jojo Moyes. Since hearing about the movie adaptation, I decided to read the book, as books always tend to be better than their movie counterpart.
In case you don’t know much about the story, it focuses on William Traynor, a 35-year-old man who was injured in an accident with a motorcyclist two years prior and 26-year-old Louisa Clark, his new abled bodied care giver.

The book and movie has received a ton of criticism from members of the disabled community for many reasons. The first is that they chose an abled bodied actor, Sam Claflin (Finnick Odair in The Hunger Games) to portray Will. I, of course, see the problems with that as it does show a bit of ableism. However, Rachelle Friedman, a woman in a near-identical case to Will, understands the choice to choose an abled bodied actor for reasons based on time and energy required of the role.

I do understand that there is a lot of misrepresentation and lack of representation of minority groups in Hollywood and the media. I do not think that is right, but in some cases, like this, it makes sense. It takes time to dress, undress, and redress people with quadriplegia. Related health complications might affect the filming schedule. Read more on Rachelle’s thoughts here.

The other big reason that the book/film has received criticism is because of the ending *SPOILER ALERT* when Will commits assisted suicide. Some disabled people and activists for the disabled have come out and said that the message of the story is that it shows that disabled lives aren’t lives worth living.

I would like to ask some of these people if they have read the book and/or seen the movie. While Will’s assisted suicide is a major part in the story, I do not think it is the main part. Yes, Will was injured in an accident and yes, he must now live in a wheelchair and rely on constant care from others. I did not get the feeling of it being about how disabled people must commit suicide. Rather, I think the main message that the book and movie tells is that life is worth living, regardless of your situation. You can make the best of what you’ve got if you just look at all of your options.

I also believe that Will’s death is not the worst thing. Is it a good thing? Absolutely not, but with his injury, Will lost his sense of control. He is a grown man who should be able to make some sort of choice for himself. Granted, I think he should have tried to live, but in the end, “you can’t change people.”

4 thoughts on “The Message of ‘Me Before You’”