Since I created this blog to help other college students, I thought it might be cool to write a post on a day in the life of studying music in college. I wrote a post about it last year, but the post got damaged, so I had to delete it. So, today, I am bringing it back. I hope you enjoy. 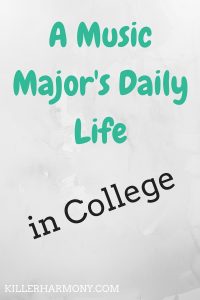 As a music major, each day is a little different, but there are some common themes of each day. That is what I will be focusing on.

This semester, I am in one *real* lecture class: basic conducting. Although, it’s not really a lecture. It’s more of a class/lab combination. I have that class Monday, Wednesday and Friday at 9 am. The class is interesting, but there is a lot more work than it may seem. It’s not one of those classes where you can show up and be fine. We do practice a bit in class, but for the most part, I have to practice on my own time.

I am also in an online class. Last semester, I added a Spanish minor, so I have to take Spanish 4. I could have taken it on campus or online, but in order to make my already busy days a little less stressful, I went with the online class. I really like Spanish, so I haven’t had too hard of a a time learning it on my own.

As part of my performance degree, I have to take a pedagogy, or teaching, class for my instrument, flute. I took the class last year for one credit, but my degree requires two credits. So, I decided to do a pedagogy independent study, but this time for the piccolo. This class is almost like a lesson, though, because I meet with my flute professor every week to go over materials and notes.

My other independent study is for my Spanish minor. I am working on a project on why you should learn Spanish and how to go about it. I plan on writing some info about it and making a website. Be sure to follow me on Twitter (here) to find out when the website will go live! This independent study is pretty independent. I try to do a bit of work on it regularly, because I don’t want to stress out at the last second. Though, procrastination is very real.

I am taking four credits of flute lessons this semester, which means that I have two hour-long lessons each week. I have my lessons on Mondays at 10 and Fridays at 11. Now that I am in the part of school where I am preparing for a lot of different performances, I like having two lessons a week. I can get more done and get more feedback.

As far as ensembles go, I am in four. I am in marching band, wind ensemble, flute choir and orchestra. Marching band meets Monday, Wednesday and Friday from 3-5, which is a lot of work. It’s also in the heat of the day, so that doesn’t help.

Wind ensemble starts half way through the semester, in order to give marching band a decent amount of time to work on music and drill. It will start soon though, and I am excited. I’m much more of a wind ensemble person than a marching band person.

Flute choir is the chamber group for flute players. It meets weekly on Thursdays. I like getting to play in a group where (gasp!) the flutes can actually be heard. Sometimes we even have altos and bass flutes as part of the ensemble. This year, I usually will be playing first flute or piccolo, as I am a senior flute performance major.

My last ensemble is symphony orchestra. I have played in it since last semester. It’s so different from in band. In band, you might have up to three other people on your same part, but as a wind player in orchestra, it’s all you. It’s also cool to see people from the community coming in and playing their instruments.

Each semester as a music major, I have to attend twelve concerts or music events on or off campus. This requirement is *technically* a class, but it is zero (yes, 0) credit hours. It’s a graduation requirement, though, so that’s how it has to work.

Some events happen at 10 am on Tuesdays, so I always try to keep that hour free so that I don’t have to worry so much about finding concerts at night to go to.

This semester, I have to perform my first of two solo recitals as a performance major. I also have to enroll in the recital “class” so that I can fulfill the requirement. I have been working on some of the music since as early as January and as recent as August. It’s been fun though. Preparing for a recital is a lot of work. If you would like to read about how I planned my recital, let me know in the comments!

In order to prepare for such an event, I have to practice a lot! I try to practice at least two hours a day, more if I can. I know that the more I practice, the better I will get, but I also believe in quality over quantity. I used to stress about getting two hours of practice in, and I would do anything to hit the two hour mark. I would just play through stuff, not really thinking about what I was doing. My mentality was “if I practice two hours, I will be good.” There’s more to it than that.

So, I hope you enjoyed reading about my days as a music major. It’s crazy to think that I am a senior in college and that these days will be over soon. I could go to graduate school for music, but I honestly don’t know how that would benefit me. I could teach at the college level, but I don’t know that that is what I want to do. I would rather work a little bit and figure out what I want to do before shelling out thousands of dollars and hours of my time. </endrant>