Welcome to Blogmas 2016 Day 2! If you have not seen yesterday’s post on the subject of Blogmas, read that first, so you’re up to speed! All caught up? Great! Today I am going to talk about my marching band experience! 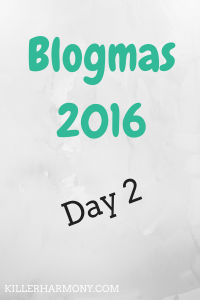 I actually don’t have a ton of stuff to say about marching band. Compared to a lot of my peers, I didn’t do marching band that long. I was in it for two seasons. Some of my band mates had been doing it since their freshman year of high school all through college. However, I do have some stuff to say about it, and so I am going to talk about how it went for me!

In high school, I did not have a marching band to join. My school was too small for sports, and so we didn’t have the chance to play for sports. I also spent my first two years of college at a community college. This time, there were sports, but there was no football. So, my first year marching was my junior year of college.

Luckily, my university’s band camp program included all of the basics. A big part of band camp was teaching everyone the proper marching style and just, you know, the basics. Some people, like me, had never marched before, and others might have marched but with a different style of stepping. I was able to learn all of the basic techniques pretty quickly.

While marching band was a lot of work, there were some fun times, too. One major benefit of band was that I got to move into the dorms a few days early. I didn’t have to deal with all of the crowds on the normal move in day, which was amazing. Not that moving in is fun…but another benefit was that I got to meet a lot of people.

Since I decided to be a music major, I ended up meeting quite a few people that would be in my music classes. That made my first day of school at the university a lot easier. I also got to meet people from other majors, too, because the band is open to anyone.

If you are considering marching band for next year, I say give it a shot. It may not be for you, but you may end up liking it. If you have done band in high school, you should try college. It’s a different environment; we don’t participate in competitions, we work to entertain the crowd. It’s a lot less stressful than having to perfect a drill for a competition.

While I was never all that excited to go to practice or to a game, I did meet a lot of people and make good friends. I was able to move in early and play music in a new setting.

Also, be on the look out tomorrow for the next installment of Blogmas. Be sure to follow me on Twitter (@HannahHaefele) so you don’t miss a post!