Welcome to the new niche of Killer Harmony! I am going to be writing about music from now on. You don’t have to understand music to read and learn from these future blog posts. I merely want to share my love of music with the world. 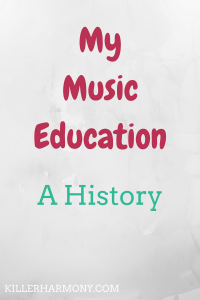 In today’s post, I am going to share my music education with you all. That way, you can get a better understanding of where I am coming from when I write about music and how music has shaped me.

I have played some sort of instrument (or sang) for most of my life, and I know I would not be the same without that musical experience.

My first musical instrument was the violin. I took lessons for a few months when I was five or six years old. I ended up quitting, because I never wanted to practice. I just wasn’t passionate enough about the violin, and the quitting pattern, as you will see, continued.

A little while after quitting violin, I started learning the piano. My parents bought a used piano to keep in the family room, and I was able to learn a new instrument. Of course, that didn’t last long. I also lost the  motivation to practice for my lessons. Such is life, I suppose.

I ended up following the same pattern of violin > quit > piano > quit again a few years later. At the beginning of fourth grade, I got to try the violin again, and I decided to join the beginning strings program at my school. Since I was a bit older, I enjoyed it a little more, but it didn’t last.

While I liked the violin, continuing after fourth grade meant getting up early, going to a different school than my own for an hour, then taking a bus to my regular school. After the first year, my district combined the strings between a few schools, so we couldn’t practice during a time like recess.

That following summer, I took piano lessons from a new teacher. I enjoyed them, and I don’t really remember why I quit. I can only assume it’s because I never practiced. In fifth grade, I remember wanting to play flute, but I wasn’t able to. I distinctly remember my mom telling me no, though she remembers asking me if I would practice. My response was no.

Near then end of elementary school and in middle school, I did some singing. I joined choir for fifth and sixth grades, and I participated in the musical in sixth and seventh grades. I liked singing, but I never considered taking lessons.

At the end of eighth grade, I took some drum set lessons. They were okay, but the exercises felt monotonous. I wanted to play the drums…not work on rhythm studies.

High school was when I really came into my own as a musician. I started saxophone as a freshman, and I continued playing that for over four years. I also picked piano back up so that I could join my school’s contemporary music band. It was through that band that I started flute. I began playing flute my junior year and became serious about it my senior year.

Even though I had not been playing flute very long, I wanted to make it my primary instrument. I never really felt as strong of a connection with any other instrument, so I had to give it a chance.

I settled on a major in flute performance, because of my musical background and my drive to succeed. While I have not played flute for as long as some of my peers, I have managed to increase my skills tremendously over the past few years.

I plan on pursuing music as a career, and I intend to use this blog as a platform to help my career. I love advocating for music, and I love teaching others. In my career, I want to teach, perform, compose and more. I hope you will stay for the ride.

2 thoughts on “My Music Education”