For singers and instrumentalists (other than pianists), an accompanist is almost always required for competitions and performances. At least, if you are playing a solo. However, there are a few pieces of unaccompanied music that are important, too. 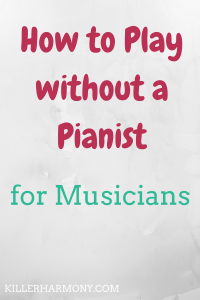 I, personally, love playing unaccompanied music. Maybe that is because of my strong piano background, or maybe I’m just…self centered…? Who knows, but I truly enjoy making music and being the only one on stage.

So, I wanted to write a post about playing unaccompanied music and give you all some tips for when you have to play alone.

If you are playing an unaccompanied work, it’s up to you to do your best and to entertain the audience. That can be stressful, but it can also be rewarding.

You can rehearse the music as much as you need to, and you don’t have to schedule times with an accompanist. If you aren’t progressing as quickly as you thought, it is easy enough to up your rehearsal time on that piece.

2. The skill of performing alone can translate to other venues.

If you are good at performing alone, performing in a group will become much easier. Once you are comfortable on stage by yourself, a band or orchestra performance won’t seem so scary.

Performing by yourself can also build your confidence in other ways. It can help with your stage etiquette and performance. Solo performance can also help you get over general stage fright and fear of being in front of crowds.

It is just one more amazing way of getting experience with performing on your instrument.

3. You can learn more music.

There are so many pieces out there that are written for solo flute or solo violin or solo cello. If you limit yourself to music that is accompanied, you lose out on a big part of repertoire.

For flutists, the JS Bach Partita in A minor and Debussy’s Syrinx are two examples of important, unaccompanied flute music. If I wasn’t comfortable on stage without someone else, I wouldn’t of had the pleasure of including each of these pieces into a solo recital.

There are six unaccompanied suites for cello written by Bach, and serious cellists are expected to know them all well. The more music you know and can play, the more versatile you become.

If you are a music major, odds are you have to perform a degree recital at some point. If your school is anything like mine was, one of the recital requirements is an unaccompanied piece.

Or if you ever perform for a masterclass or an audition, you may not be able to bring an accompanist. There are some instances in music where you have to play by yourself, and that is a good thing.

You can learn more by listening to yourself without the influence of outside factors, like other musicians.

Now, for my favorite unaccompanied works.

If you want to look into unaccompanied music, check out these pieces. They are so good, and I am sure you will love them.

Bach, J.S. Partita in A minor

I played this piece on my junior recital, and while it seems very technical, there is something about it that I just love. The Baroque style comes through a lot in this piece, and I really think every flutist should learn it at some point.

Syrinx is based on the love story of Pan and Syrinx, where Syrinx runs away from Pan and into the forest. Syrinx then hides by shapeshifting into some weeds. Pan finds these weeds and crafts a flute that he begins to play. The ending is marked by Pan’s realization that he has killed his love.

It sounds morbid, but the sounds Debussy wrote are so awesome. This is one of those pieces that should be memorized if at all possible, because Pan is improvising, basically.

I played this piece for my final flute studio recital, and I have to say that I really love it and the story behind it. The piece was written by Ibert after the premier of his flute concerto; it was basically an encore.

Telemann’s 12 fantasias for solo flute are great works to play for solo gigs. They are each their own work, but they can be strung together as part of a larger program.

These pieces are also a good introduction to the piccolo, because the range is well within that of a beginner. It doesn’t go too high or low, which makes the piccolo a lot less intimidating.

Bach, CPE Sonata in A minor

This sonata has three movements, and is typical of the later Baroque style. If you want something to contrast the Partita by JS Bach, this is the piece for you. I have been working on this sonata, and it is hard, but fun.

Those are my tips for playing without an accompanist as well as my favorite unaccompanied flute pieces! If you have any other tips or favorites, comment below!

And don’t forget to subscribe for exclusive music thoughts and tips sent straight to your inbox!