I just bought my first professional flute, at NFA. If you’re following me on Instagram, then you already know this. And if your not following me, be sure to! I post lots of updates on there. 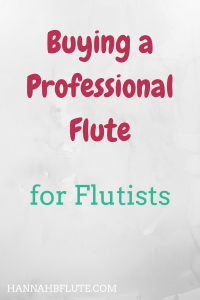 But, for this post, I wanted to share some information on how I ended up buying my new flute. I also want to share some tips for any of you who are looking at upgrading to a new flute.

The info I’m about to share will apply to flutes, piccolos, low flutes…and (to an extent) other instruments as well. Unlike last week, this post is gonna be a long one. So let’s get started!

Before we get into it, this post contains affiliate links. Read my full disclosure policy to learn more!

Before you actually go to buy a new instrument, you need to either have the money or know that you will be able to pay for it with financing. If you only have $100 in your bank account, you’re not gonna be able to afford a flute. That’s just the reality of the situation.

Over this past year or so, I have been saving up as much money as possible. Partly in anticipation of buying a professional flute, but also to build an emergency fund and to save for graduate school.

I do live at home with my parents and am lucky enough to not have to pay rent; I am also still covered for things like health insurance and the like. So, yes, it was easier for me to save enough money for a professional flute in one year.

You want to do your own research to see what is out there, what sparks your interest, and how much you would need for those flutes. Plus, there are over a dozen companies that make professional flutes. Different companies use different materials, like sterling silver, Britannia silver, Gold/Silver alloys, and more.

Then you also have different mechanisms. Companies like Powell, Brannen, Miyazawa, and Pearl all use some sort of pinless mechanism, whereas other companies use a pinned mechanism.

Do you research to figure out what materials, designs, and models are out there so that you can prepare for the next tip.

One thing I didn’t even touch on in the last tip was the different add-ons for flutes. You can get a C# trill key, a split E mechanism, a D# roller, and even different headjoint cuts. All of this does add to the cost of a flute. So when making your budget, don’t just consider the base price, consider the base price PLUS any extra upgrades you want for your flute.

Because this purchase was my first professional flute, I didn’t want to go too expensive. I set a budget of about $10,000. From the research I did, that seemed to be a good number in terms of what I wanted in a flute. I wanted (at least) solid silver throughout the tube; I wanted a C# trill key, offset G, B foot, open holes.

Now, you may not want some of those things; you may want a completely different flute. So again, do some research on the flutes that you are interested in and budget (and save) accordingly.

I was pretty lucky in that I was able to go to the NFA convention this year. There were SO many flute makers and flute dealers all in one place. I was able to try a Powell, a Burkart, a Di Zhao, a Miyazawa, and others before settling on my new flute.

While I do live in a major metropolitan area, there are not a ton of places for me to try professional flutes. My flute repair tech carries tons of flutes, but most of them are at the step up/intermediate level. The only professional flutes she carries are from Altus, Miyazawa, and Sankyo. All of those are great brands, but they barely scratch the surface of professional flutes.

If you are not able to attend a flute festival or convention (NFA or otherwise), you do still have options. All of the flute dealers I mentioned earlier (FluteWorld, FCNY, Flutistry Boston, and Carolyn Nussbaum) allow for in home trials. You can contact any one of those companies and add to try flutes. Now, trail by mail isn’t always free; you will either need to pay for shipping or have a hold placed on your card for the value of the instruments. Each company has different trial policies.

But no matter how you do it, try out different flutes before buying. You will thank yourself.

Last November, I briefly played a Miyazawa 602. I was at my flute tech’s annual flute party, and, while I was mostly there to test piccolos, I had a second to try a 602. All I played was a scale, but from that, I thought it might be the flute for me.

Why am I telling you this? Well, I did not end up buying a Miyazawa 602. I tried one at NFA, more in depth this time. So for about nine months, I thought I knew which flute was for me.

I did play a Lyric Artisan flute; Lyric and Miyazawa are “partners” similar to Altus and Azumi. So I thought that Miyazawa would fit me. When I tried the 602, I realized that it wasn’t all that different from my Lyric. There wasn’t anything that struck me about the flute.

The flute I ended up choosing was a Pearl; you can check out my Instagram for posts about it.

While I had considered Pearl (my piccolo and alto are from them), it wasn’t my first thought. But when I walked through the Pearl booth at NFA, my whole world stopped when I saw this flute. I picked it up and instantly felt a connection.

When you are trying flutes, it can be overwhelming. Especially if you are at a flute festival or convention and are surrounded by flutes, don’t feel like you have to buy a flute then and there. Even if you want to.

As much as I fell in love the flute, I knew that I did not want buyer’s remorse. Professional flutes cost a lot. They are an investment, not an impulse buy. That’s what sheet music is for.

I left the Pearl booth and walked around the convention a bit; I went to a couple of workshops, and I had lunch. During that time, I couldn’t stop thinking about the flute.

It was calling me. Maybe this is cliche, but we flutists are like the wizards in Harry Potter. The wand chooses the wizard; the flute chooses the flutist. And this flute chose me.

So, I went back to the Pearl booth that afternoon and tried the flute again, this time testing it in other ways. I fell in love all over again, and I knew it had to be mine.

Yes that all happened in one day, but it was over the course of a few hours. So if you can, try some flutes and walk away. Maybe try other flutes or do something completely unrelated to music. Later, you can come back to the flute(s) that you enjoyed and you can (hopefully) make a clearer and more informed purchase.

Buying a professional flute is not for the faint of heart. Ideally, you will already be at a high level of playing before you even consider it. And that’s what’s so great about step up and intermediate flutes. They give advancing students the ability to upgrade their flutes and get some professional features but for a lower cost.

That also allows players to hold off on buying a high cost flute for a bit longer.

If you are in the market for a professional (or even an intermediate) flute, don’t hesitate to set up a trial. You can set up a trial with one of the previously mentioned companies, you can contact a local flute dealer, or you can also look for flutes for sale online. The last option is tricky, but it can be a good way to find used instruments which cost less than new instruments.

Have you upgraded your flute before? What flute did you end up buying? Let me know down in the comments!