It is that time of the year again. School is starting up, and some of you might be preparing for college or ensemble auditions. Because of this, I wanted to share some of the most important flute pieces. 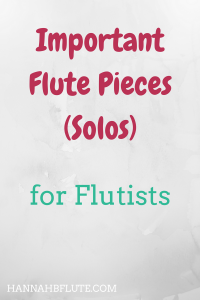 While some auditions do specify what pieces they want you to play, others give you free choice. If the latter is the case, you want to make an informed decision so that you can show off not only your strengths, but your knowledge of the flute and flute repertoire.

I will be sharing some of my favorite flute pieces as well as other pieces that are considered pivotal. The flute has a lot of repertoire, so hopefully this list will help narrow your scope when looking for pieces to play.

And while you’re here, be sure to check out my tips on how to sight read.

J.S. Bach was one of the most well known composers of the Baroque period. He wrote music for violin, keyboard, cello, flute, etc. His Partita in A minor for solo flute is incredibly technical, and it is really only for the most advanced players.

Some of his less difficult works include his flute sonatas. However, two movements from Bach’s orchestral suite will always stick out in my mind: Polonaise and Badinerie. For all of you Kansas flute players, Badinerie is actually this year’s audition piece for all state.

Who could write a post about music that did not include Mozart? The Concerto in G major is asked for in almost every professional orchestra flute audition; it is that famous.

Then you also have the Concerto in D major. That one is important too, however, sorry oboists, we stole it from your C major concerto.

If you are not up to the challenge of learning a concerto, then try Andante in C or the Mozart Rondo. Andante in C major as written as a second option for the second movement of the Concerto in G major. So it is a nice introduction to his bigger works.

You have the more famous works like the Chaminade Concertino and the Faure Fantasie. You also have some lesser known works like the Perilhou Ballade.

The Paris Conservatory played a huge role in flute repertoire, and every flutist should learn at least one piece out of “that French book.”

While I have not personally studied it, I do know that the Ibert Concerto is a very important piece for flutists. What’s kept me from learning it then? Cost.

Most contemporary works are still under copyright protection which means that you have to purchase the music. It isn’t available on a site like IMSLP.

If the Ibert Concerto is daunting to you, try Piéce. Ibert wrote this unaccompanied work as an encore to his concerto. He literally wrote it on the spot at the afterparty of the concerto’s world premiere.

This is for all of you piccolo nerds out there: Vivaldi. While Vivaldi wrote more for strings than for winds, his piccolo concertos still remain famous. His Piccolo Concerto in C major is particularly well known.

If you haven’t played either Syrinx or the opening solo from Prélude a L’apres-midi d’un faune, you haven’t lived. Debussy’s flute writing is challenging yet beautiful.

Yet another unaccompanied piece, Syrinx tells the story of Pan and Syrinx, in which Syrinx disguises herself as bamboo and Pan turns into a flute. In the end, Pan realizes what he has done to his love, and the end of the piece shows his sadness.

The prelude is an orchestral work which starts with solo flute. The opening solo requires a good breath support and overall control. If an upcoming audition calls for orchestral excerpts, consider playing Debussy.

Telemann wrote 12 Fantasias for solo flute. They are in different keys, and they are all unique. Each Fantasia has multiple movements and can be performed as its own work.

I love playing them on both piccolo and alto flute in addition to C flute.

There are many flute sonatas from the 20th century, and so I thought I would combine them all under one section. There are sonatas by Hindemith, Poulenc, Prokofiev, Taktakishvilli, Martinu, and a whole lot more.

There is also a Sonatine by Dutilleux.

While I could not touch on EVERY piece of flute repertoire, I hope I introduced you to at least one new piece to learn. If you guys want to see a version of important flute pieces specifically on chamber works or orchestral works, let me know.

Are there any important pieces that I missed? Leave your favorites down in the comments!