Musicians today are quite lucky. There are many different paths that we can take to pursue our passion. We are not “stuck” with just teaching and performing anymore. Music cognition is one of the up and coming fields that musicians can go into. 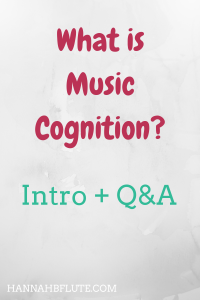 I have become really interested in music cognition, and yes, music and science DO mix! In this post, I am going to talk about the basics of music cognition, share some of my favorite resources, and answer some questions you might have.

Music cognition is a relatively new field, but it is growing. So, here’s what you need to know about this awesome subfield!

The specific fields involved can differ depending on what you want to learn about. Some research is based more in computer science where as other research might be more based in psychology.

Music cognition scientists ask questions like: why does music make us feel one way? What are the benefits of studying a musical instrument? How can we improve as musicians (from a scientific standpoint)?

A lot of what music cognition scientists do depends on what they want to research specifically. You might be more interested in music and movement. Or you might prefer to study why we feel certain emotions when listening to music.

While music cognition is a small field, it is by no means narrow.

Can I Major in Music Cognition?

You can! There aren’t many programs in the United States, and most are at the graduate (doctoral) level. But you definitely can get a degree in music cognition. You can start by majoring in music as an undergraduate. Study music performance, music education, music theory…whatever else interests you.

Major in music at the bachelors and/or masters level, that way you can be prepared to study music at the doctoral level if that interests you.

You by no means need a doctoral degree to work in music cognition, but you will get more experience, and you will have more job opportunities.

If you want to start looking into music cognition, there are a couple of awesome books you should check out.

The first book I read on the subject was “Musicophilia: Tales of Music and the Brain” by Oliver Sacks. This book share some very interesting cases where peoples’ relationships to music change all because of a change in their brains.

Sacks talks about people who experience seizures, triggered by or involving music. A man struck by lightning later has the sudden urge to learn all of Chopin’s works on piano. And there are tons of other cases where music changed people’s lives.

Another book that I am currently reading is “This is Your Brain on Music: The Science of a Human Obsession” by Daniel Levitin. This book is a bit more technical than “Musicophilia,” but it is still worth reading. So far, it talks about pitch relationships, music and emotion, and why we love music (organized sound).

If you can’t wait to get a book, then I would also suggest checking out the Society for Music Perception and Cognition. They have an entire page of resources that you can check out. These include other music cognition organizations, other related websites, and even a list of related labs around the world.

Will I Be Pursuing Music Cognition as a Career?

At this time, maybe. I definitely want music cognition to play a part in my career. While I love performing and teaching, there are other things I want to do.

I have other interests that music cognition would let me explore, like foreign languages and neuroscience. In fact, there was a short period of time during middle and high school when I wanted to become a neurologist.

The preteen in me is beaming right now.

What Should I Major in as an Undergrad?

If you are interested in music cognition, definitely major in music. You could major in general music, performance, education, or some other field like composition.

Most schools don’t have an undergraduate major in music cognition. Majoring in music will prepare you for graduate study, and it can also make you more marketable later on.

For example, if you major in performance then go on to get a degree in theory and cognition, you can get a job teaching theory, cognition, and applied lessons.

So get your bachelors in music, then consider getting a masters, because some programs also require that, then you can get your PhD in theory and cognition.

What are Some Good Minors or Second Majors that would Benefit Students Interested in Music Cognition?

If you want to pursue a minor or a second major, choose something you are already interested in. I minored in Spanish, which was something I liked anyway. And it just so happens that it will help me in my career.

If you can’t decide, then you might consider choosing a language, biology, physics, psychology, or English. Foreign languages will help if you want to study music and language, but they will also help you in graduate music school. A lot of graduate music degrees require reading proficiency in a foreign language, so get started sooner rather than later.

English is also a good minor or major, because it gets you to read and to write. Reading and writing are huge in any research field. You have to be able to read other studies and write your own papers.

There is a lot more to the field of music cognition than I could list here. If there is anything specific that you want me to cover, let me know in the comments!