If you follow me on Instagram, you probably saw my post about starting my masters degree. I still can’t believe I’m going back to school, but I’m also very excited. That being said, I want to share some things I’ve learned so far about graduate music school. 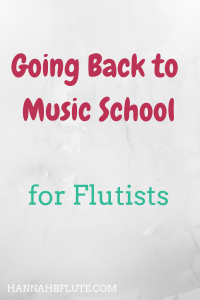 First, I want to talk about making the decision to earn a masters in music. While you probably have your own reasons either way, I want to share my reasons to help anyone who’s on the fence about doing a masters.

My senior year of undergrad was pretty crazy. I completed both my junior and senior recitals, and I was just ready to get out of school. A lot of drama happened that year, and I just didn’t feel like dealing with it. I was done with music school.

The summer after graduating, I had a change of heart. I was out of a (somewhat) toxic environment, and I realized that a masters would be a huge help for my music career.

So I started looking around at different schools. Initially, I wanted to start my masters in the fall of 2018. That got put on hold after I took a full time job in September 2017. I didn’t practice as much, and I also just wanted to reach a year at that job.

This past spring, I started practicing more, and I took the idea of graduate music school more seriously. I looked into different schools, and I reached out to a few of them in the summer.

The plan was to start next fall (2019), but I had another realization that August might be too far away for me. That left me with spring admission.

The two schools with great pedagogy programs were my alma mater and another school in a small town. I decided that I really wanted to study in a mid to large city. While my alma mater is very much a small college town, I kept it on the list, because it was a safe bet.

I personally believe that it’s important to have a safe choice on your list of schools. You should have one school that you are (almost) guaranteed to get into.

That left my alma mater, a larger state school with an orchestral focus, and my top choice: University of Nebraska Omaha (UNO). I became really interested in the piccolo during undergrad, and I knew that I wanted to continue that interest in my masters. Dr. Christie Beard is a well known piccolo specialist, so who better to study with?

*To maintain my privacy and that of the schools I didn’t choose, I won’t be sharing their names.

Some schools have partnerships with other states to allow discounted tuition to qualifying non-residents. The biggest partnership is probably the Midwest Student Exchange Program (MSEP).

Since I’m from the midwest, I stuck to schools in my state and other midwest states. While I’m not from Nebraska, I do qualify for the MSEP rate. That means I won’t have to pay the full out of state tuition.

While cost isn’t everything, you should consider it when making your final decision. There are many ways to pay for grad school without loans. You can apply for an assistantship, apply for scholarships, and also look into any waivers that a potential school has for you.

You might wonder why I chose to start graduate music school in the spring. I didn’t plan on a spring start, but it seemed like the best choice for me. I wasn’t ready to start this past fall, and I realized I didn’t want to wait until next fall. What was left? Spring!

In my backstory, I talked about why I didn’t go straight into my masters. While the drama definitely played a role, I also wanted to get a masters for the right reasons. At that point, my reasons would have been to avoid the real world and because I was told I should get a masters.

Now that I have been out of school, I know that a masters will help me with my career. I can learn much more about music and the flute, and I know what it’s like to be out of school. Now, I get to do it the right way.

If you’re still in undergrad but you know exactly why you want a masters, then go for it. I’m not gonna say that everyone has to take a break from school. Some people won’t go back to school if they leave. Others don’t want to put off that extra schooling. I get that.

If you are unsure about a masters, I would suggest taking some time off. Take private lessons. Play in a community group. Use that time to discover what you want in life and if a masters is really something you want.

I don’t regret taking time between my bachelors and masters. Doing so means that I can do graduate music school the right way and with good reasons.

Are you considering a masters in music? Leave your questions below, and I will try to answer them in a future post!