Hey friends! A while back, I saw a couple of flute teachers complain online about the lack of materials that cover music theory for flute. 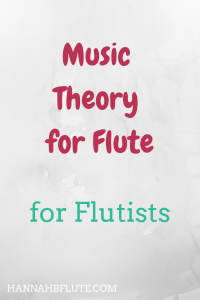 There are plenty of music theory books for piano, but why not flute? Of course, flute method books cover the basics, but those basics don’t cover everything a flutist needs to know.

So, here’s a small guide covering some common music theory for flute topics.

What is Music Theory?

Why should you learn it?

If you plan to play music with other classical musicians, odds are you’ll be handed sheet music. So you need to be able to read that sheet music.

Plus, some things are easier to explain with one or two symbols rather than a paragraph of text.

Why is music theory for flute important?

There are tons of basic music theory topics. Many of them apply to all instruments. But there are some things that are specific to flutes or woodwinds.

So while you can use a general music theory book to get started, soon you’ll probably want something more specific.

Everything from an instrument’s range to playing techniques can vary between instruments. An understanding of music theory for flute will help your flute playing immensely.

To better explain some of these concepts, I made a handout. You can download the cheatsheet for free by subscribing below or by clicking here.

So if you’re a visual learner, be sure to download your copy of the cheatsheet before you continue!

While the clef isn’t specific to the flute, it’s the perfect place to start. If you’ve ever used a piano music theory book, you know they cover treble and bass clefs.

The treble clef has five lines and four spaces, and you can remember them as follows:

Lines: Every Good Boy Does Fine

To play notes above or below the staff, we use ledger lines. Ledger lines are short lines that extend the written range of a clef. And as flutists, that’s really important.

When you start learning flute, you’ll only be playing a few notes. And unfortunately, those first notes don’t line up with those on a piano.

The first notes on a piano start at middle C, below the treble clef. But the first few notes for a flute player are right in the middle of the treble clef with B and G as common starting notes.

Once you reach an advanced level, you’ll have a much larger range. The lowest note on the flute is middle C or the B just below that. If you live in North America, odds are you’ll upgrade to a flute with a B footjoint at some point.

Then the highest note of the flute’s normal range is a D over three octaves above middle C. That’s quite the range!

One thing that piano players don’t have to think about is when to breathe. They can breathe whenever they need to.

But as flute players, we have to breathe when it makes sense for the music. We can’t just stop playing a note because we’re out of breath.

That’s where breath marks come in. I’ve seen a few different styles from a comma or check mark to a skinny arrow pointing down.

Different composers use different marks, so you should know at least a couple of them. And oddly enough, some composers and arrangers use one mark for a quick breath and another mark for a fuller breath.

Love them or hate them, most flutists will come across harmonics. If you overblow a note enough, you’ll create a pitch in that original note’s harmonic series.

I won’t go into the harmonic series here, but playing harmonics can help in multiple ways.

Another flute-specific notation (or at least woodwind-specific) is for flutter tonguing.

I’m still working on my flutter tonguing, and it’s a pretty advanced technique. So if you’re a beginner, you don’t have to worry about this one quite yet.

Flutter tonguing is when you produce a super fast articulation (faster than double or triple tonguing).

You can produce it by rolling your tongue like a Spanish R sound. Or you can make a gargle in your throat to create a similar effect.

The notation for flutter tonguing looks like a few diagonal lines drawn beneath the note.

Did you learn a little something about music theory for flute? Or maybe you’re confused and need a visual. If that’s the case, subscribe now so you can download your cheatsheet here!

2 thoughts on “Music Theory for Flute”