When I first really wanted to learn flute, I actually veered to the saxophone. I thought the flute would be too competitive and that sax would be cool, too. 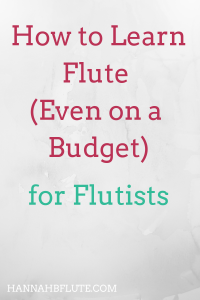 Little did I know that I would switch two years later.

While my reason for not starting the flute had less to do with money, I know cost is something a lot of people struggle with.

But you can learn flute on a budget. You just have to have a few tricks up your sleeve.

There are many reasons to learn flute nowadays. Whether you love Lizzo and Terry Crews or Galway and Pahud, there are tons flutist in all genres.

That means that regardless of your favorite genres, you can probably find an inspiration to listen to and look up to. There really has never been a better time to learn flute.

Not to mention the flute has a TON of repertoire available from baroque to pop music. And the flute has definitely come a long way since it got its start thousands of years ago.

That’s right. The flute is one of the oldest instruments, aside from some basic drums and percussion.

People have decided to learn flute for centuries, and that’s not going to stop any time soon. Of course, the flutes we play today only got their start in the 19th century.

The current system is sometimes called the Boehm flute, because the design was created by a man name Theobald Boehm. While his ideas were (clearly) amazing, it did take some time before his system became standard.

But back to today…there are still some amazing developments being made and added to the flute. That makes it much easier to learn the flute but also to learn flute music.

Anyone care for a Split-E or C# Trill?

As one of the world’s oldest instruments, the flute has a ton of music available. JS Bach wrote multiple sonatas for the flute (as well as a solo partita).

Telemann and Handel also wrote great music for the instrument.

Moving to the classical period, Mozart wrote (let’s be honest) one fantastic flute concerto. The piece we know as the second flute concerto was actually written for oboe and transposed up a step.

And when it comes to romantic music? That’s our bread and butter. Thanks to the Paris Conservatory, we have a ton of great pieces from French composers.

Of course, more and more flute music is being written each year. The 20th century brought with it a lot of rep, and so will the 21st.

But the variety doesn’t stop at classical or contemporary classical music. Lately, celebrities like Lizzo and Terry Crews have brought the flute to center stage.

Simon Cowell may not like the flute, but clearly, he hasn’t the chance to learn flute.

This heyday has been amazing, and I hope it doesn’t slow down. The number of flutists and teachers is reason enough to learn flute.

But You Can’t Afford It

As a social media fiend, I often see people in flute groups posting that they can’t afford the flute but want to learn. And I get it. Flutes aren’t cheap.

For reference, my current flute costs more than a semester of college. But you don’t have to spend that much to get a good instrument.

You just have to consider your options when it comes to paying for and starting to learn flute.

Flutes can be expensive

Student flutes start at around $400 new, and if you aren’t positive you’ll stick with it, that’s a lot of money to spend. You can also find used instruments for a little less.

But you can’t just account for the purchase price. You should budget for regular maintenance as you learn flute. Things happen, screws move, and pads wear down.

I mean, you wouldn’t pay the same to maintain a Honda Civic as you would a Ferrari.

Plus you need music

Still, that adds up. As you learn flute, you’ll have to get new music books to keep challenging yourself.

Luckily, the internet is the perfect place to find free and affordable sheet music. Now, you will probably need to purchase a method book as you start.

However, as you learn flute and start learning repertoire, you can find great music online for free. Websites like IMSLP and Flute Tunes are two of my favorite places to look for free sheet music.

I’m not gonna lie. Flute lessons can get expensive. Depending on where you live, your teacher’s credentials/experience, and the lesson length, lessons can be too much.

Private teachers deserve to get paid what they’re worth. That way, they can give you the best education possible.

If a teacher charges minimum wage, odds are they won’t be as invested in you. But a teacher who charges whatever their experience dictates will probably be more enthusiastic and willing to help.

How to Learn Flute on a Budget

Unfortunately, there are some road blocks to learning the flute. Of course, access to a proper instrument and education is essential.

Cost can deter you from all of those things. But it doesn’t have to. You can learn flute on a budget.

However, you have to be more resourceful.

An easy way to save money of getting a flute is to rent it. Many music stores offer rent-to-own programs so your rent payments count towards a purchase.

If you can’t afford to shell out a ton, renting an instrument means you can learn flute sooner rather than later.

The internet is your friend

I already mentioned my two favorite sheet music sites. IMSLP and Flute Tunes have a plethora of free sheet music available for all levels.

And there are tons of other ways to learn flute online. Blogs (like mine) are great, and so are YouTube videos.

Some people even share tips of social media platforms. It has never been easier to learn flute on a budget.

Even if you rent or borrow an instrument and find resources online, you still may have to pay for lessons. If you want a private instructor, you really can’t avoid paying.

However, there are ways to reduce your tuition bill.

First, you can take shorter lessons. Shorter lessons are actually perfect as a beginner. But even if you’re advanced, cutting your lesson time in half will cut your bill.

If you like having hour-long lessons, consider taking them less frequently. Maybe do a lesson every other week.

And if that doesn’t work, you can look for a less experienced teacher. This can be good and bad. It’s good because newer teachers won’t usually charge as much as those with more experience.

But newer teachers (or advanced students) won’t have as much knowledge when it comes to teaching. In the best case, you may not learn as quickly.

And in the worst case, you could end up with some bad habits.

If you want to learn flute, you have to spend some amount of money. Be it on an instrument, sheet music, or lessons, it’s not cheap.

However, you can make it less expensive. You just have to know how. Do you have other tips for lowering the cost of learning the flute? Leave your tips below!