For awhile, many flute players learned the flute and piccolo, and that was that. But now that the alto flute is gaining popularity, more flutist have to choose the right alto flute headjoint for them. 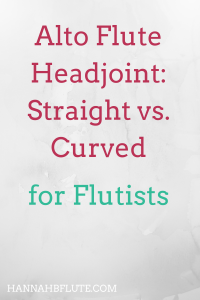 Whether you like the sound of a straight headjoint or the comfort of the curve, it’s an important decision to make. Because unfortunately, it’s not always easy to buy another headjoint, especially for low flutes.

What Is an Alto Flute Headjoint?

An alto flute headjoint is what it sounds like: it’s a headjoint for the alto flute. However, these headjoints differ from the ones on your concert flute.

While a headjoint serves the same purpose regardless of the type of flute it’s for, alto flute headjoints can vary a lot.

The biggest difference is between straight and curved headjoints.

If a straight headjoint (one that looks like your typical flute headjoint) isn’t comfortable, you can use a curved headjoint.

Some beginner concert flutes have a curved headjoint to suit younger or smaller players. The curved alto headjoint is similar, but you don’t have to be young or small to use it.

Why the Alto Flute Headjoint Matters

When choosing an alto flute, you want to choose one with the right headjoint for you. Some players want the comfortable reach of a curved headjoint, while others prefer the balance of the straight headjoint.

Aside from looks, there are a few main factors to consider when deciding on the right headjoint for you.

The alto flute plays a fourth lower than the concert flute, so it’s quite a bit longer and thicker. Since the keys are farther away, this can make it hard for players with shorter arms to reach the keys.

Notice how I said shorter arms, not just shorter people. Reach is independent of your height. I know plenty of taller flutists who prefer a curved headjoint and some shorter players who like the straight design.

Some alto flutes have ergonomic keys, which can make them easier to reach. However, plenty of flutes don’t have that feature, so you should definitely try any alto flute that you consider.

One benefit to the straight headjoint is that it has fewer intonation problems than the curved. When you add the curve, it can affect the inside of the tube, which can then affect the pitch.

The difference is especially apparent in the third octave. While you may not play that high that often, parts do have notes up there.

Luckily, with both headjoints, you can use alternate fingerings to correct pitch problems.

Another thing to consider is the playing angle. Since straight altos are longer, you may have to work harder to keep the flute level with your embouchure.

Curved altos bring the body closer to you, but you also have to find the right angle for the curve. Some players like to have the lip plate level with the body, while others may like some other setup.

And along with the playing angle is balance. A straight headjoint alto will have similar balance points to the concert flute.

But a curved headjoint may differ based on how you align the headjoint with the body.

Is One Alto Flute Headjoint Better?

If one style of alto flute headjoint was better, it would probably be way more popular. However, curved and straight head altos are pretty equal.

In fact, you can buy many altos with both types of headjoints. Some players like to practice on the curved headjoint to avoid pain. But they switch to the straight headjoint for performing to get the benefits of the better intonation.

I personally think you should practice and perform on the same style headjoint to get used to the feel of the instrument.

Overall, it’s up to you which headjoint to play on. Neither style is better for everyone. But there’s probably one style that works better for you.

Who Should Play a Straight Alto Flute Headjoint?

If you have no idea which style you should try first, there are a few types of players who might prefer the straight headjoint.

Since the balance is similar to the concert flute, the switch to a straight head alto might be easier than switching to a curved headjoint.

Whether you don’t like the balance of the curved alto or you want an easier switch, a straight headjoint is worth considering.

Who Should Play a Curved Alto Flute Headjoint?

It doesn’t matter your preference. If you physically can’t reach some parts of a straight headjoint alto flute, you should choose a curved headjoint.

Whether you already have joint problems or not, you don’t want to worsen them. Stretching that far too much can cause issues, and your health should take priority.

You might also prefer the curved alto if you have shorter arms or smaller hands. Even if you don’t have joint problems, you don’t want to develop pain from playing an instrument.

The alto flute is an up and coming flute, and more and more people are starting to play it. But that means that more people need to decide between a straight and a curved alto flute headjoint.

Sure, you could buy both, but you probably won’t use both that much.

Do you play a straight headjoint or curved? Let me know in the comments!