When you started playing an instrument, you probably thought of all of the amazing solos you’d get to play one day. You probably didn’t think as much about the holiday music that would come up every year. 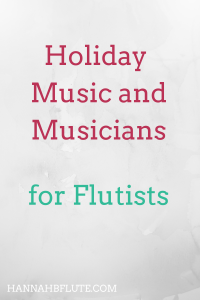 For better or worse, holiday music plays an important role in our culture. Without music, the holidays would be boring.

So, what exactly is holiday music, and how can you prepare now for the craziness?

What Is Holiday Music?

Holiday music is music that has a special relationship or meaning for a certain holiday. At this time of year, that means (primarily) Christmas music.

You know, the tunes that you don’t hear from January to November. But that you hear all of the time from now to December 25.

Of course, other holidays also have music. Growing up, I played and listened to some Hanukkah music. And while those are probably the two most popular holidays for music, they aren’t the only ones.

Music is a huge part of more holidays than you think. Still, music’s presence surrounding winter holidays is such that we musicians will probably play an entire program of that music at some point.

Even if you don’t celebrate Christmas, you’ve probably heard such classics as “White Christmas” or dances from The Nutcracker.

Other Christmas songs include “O Come, Emmanuel” and “Do You Hear What I Hear?”

At this time of year, entire radio stations dedicate their playlists to Christmas music. Some people go all out with the decorations that they set their displays to music.

And there can be something special about sitting around the fireplace with a tree nearby, drinking cocoa, and listening to Christmas music.

Maybe it’s because I grew up with a Jewish best friend (and we’re still close) or simply because my elementary school was relatively diverse for the area, but I also grew up surrounded by Hanukkah songs.

“Dreidel, Dreidel” comes to mind, but I know there were a few others. Sure, there aren’t as many Hanukkah songs as Christmas songs. However, Hanukkah isn’t as big of a deal in Judaism as Christmas is in Christianity/secular culture.

While the winter holidays have tons of songs associated with them, other holidays have related tunes. For those of us in the US, patriotic songs are often played around Independence Day.

Stars and Stripes Forever is a popular tune for these summer concerts.

Other patriotic tunes probably made a recent appearance in light of Veterans’ Day.

What’s the Deal with Holiday Music?

Since music plays such an important role in the next few weeks, you might wonder why. And that’s a valid question.

Why now? When most of the year doesn’t have seasonal music, what makes November and December so special?

A big reason why music plays an important role at this time of year is religion. Many services include music year-round, and the holidays are no exception.

The only difference may be that people who don’t practice religion probably know more of the songs.

And some people who don’t frequent services for most of the year might be more likely to attend in the coming weeks.

Since Christmas has flooded American culture, it’s become less of a religious event. Whether we like that or not, Christmas is here to stay.

The holiday has become a reason for families to gather and exchange gifts. Parties abound, and what party is complete without some form of music?

Last year, a few members of my family and I performed a rendition of “Favorite Things” for the rest of the fam. The family loved it, which further proves to me that music can play an important role in enjoying the holidays.

Still, some musicians and groups organize specific holiday concerts. That way, they can show their music with others who may not come to a concert with “random” pieces.

How to Manage Holiday Music

If you have some holiday music to perform this season, you have to be prepared. There are so many holiday tunes that you could perform, and odds are you won’t get to everything.

Managing this much music can apply to holiday music as well as music in general. You just need to go at it with a bit of planning.

As soon as you find out you have to play holiday music, start working on it. Get a copy of the pieces/parts, and incorporate them into your practice routine.

Of course, you shouldn’t ignore your other music. However, you may have to be more efficient with your practice time.

And the earlier you start working on your holiday music, the less you will have to worry about cramming later on.

Another thing you may have to do is prioritize your music. If you have a lot to work on, you probably won’t get to everything every day.

Of course, you should rotate through everything every couple of days. However, the music you have to perform next should have some priority over other things.

If you have a concert next week, that music takes priority over the stuff for a month out.

Similarly, you have to organize your music so that you don’t lose anything. You can use folders to separate music by ensemble or type.

I have switched to using an iPad for my sheet music, and that has made things much easier. Instead of multiple books and folders, I just need my iPad when I go to practice.

If I can’t find a piece, I can use the search bar in my sheet music reader app to locate it.

But if you can’t or don’t want to use technology, you can still organize your music. Just make sure you label your different folders and that you pack everything you need for the day or rehearsal.

Know when to say no

At this time of year, you might get a few calls to play holiday gigs. While some of that can be beneficial, you don’t want to take on too much.

If you have a couple of gigs lined up plus finals plus other concerts, you may have to limit yourself. You don’t want to go insane from a lack of sleep or free time.

While performing is awesome, too much of it isn’t always good.

How do you stay on top of holiday music at this time of year? Let me know in the comments!