Music education and performance are probably the two most common music majors out there. Most schools with music programs offer those majors, and some offer other music-related degrees. So, it’s a common question: should you major in music education or performance? 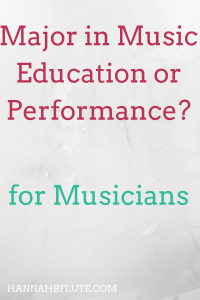 Neither major is easier or harder than the other. It’s really up to which degree is a better fit for you. Your specific goals with music can help make that decision.

But there are some other things to consider, too.

While it might seem like music is all one major, that’s usually not the case. Of course, smaller colleges may only offer one music degree.

However, most medium and large colleges and universities have a couple of options. There are many facets of music that you can study at the college level.

Because of that, many universities want to cater to those interests.

If you major in music performance, you will spend a lot of time with your main instrument. You can major in the performance of a specific instrument, like flute or piano.

While you may have the chance to play other instruments, you will focus most of your time on one.

A music performance degree does, however, also require some amount of piano studies. Even if piano isn’t your main instrument, you should be able to play it at a basic level.

Later in your music performance degree, you’ll have to give two recitals. Throughout your degree, you’ll perform as part of different ensembles on your main instrument.

You’ll have to learn various instruments from strings to brass to voice. If you end up as a band director, you should know the basics of each of the instruments in your ensemble.

Majoring in music education also means you’ll need to study a bit of piano. You will also need to take professional development classes for all education majors.

As a music education major, you’ll have to give one recital.

While music education and performance are the more common music majors, you can also usually major in music studies or general music.

You’ll probably have more general education requirements than other music majors. Some schools may require you to choose a minor when you major in music studies.

At larger schools, you may have the opportunity to major in music in other areas. Some of these other fields include music theory, composition, and music therapy.

If you want to compose music, a major in composition can be a good way to improve your skills.

Music therapy majors can learn how to use music to treat certain medical conditions or help with disabilities.

Newer music majors include focuses in technology and entrepreneurship. Both of those can be a great way to make yourself marketable in the 21st century.

Should You Major in Music Education?

For a lot of prospective music majors (and their parents), a major in music education is easy. Music is a tough field to enter, and teaching is almost a guarantee.

If you want to major in music education, you should be super sure that it’s the right choice for you.

Teach in a public school

Of course, you can also teach in private schools. Your teaching credentials might make you a better candidate than other applicants.

NOT a backup plan

Many music majors choose education because it seems like a good backup plan. If you can’t get a performing job, you can fall back on your teaching degree.

However, that’s not how you should look at a music education degree. Music education programs rarely take just four years to finish.

Even if you never change your major, your student teaching semester might extend past those four years.

Also, there are students out there who WANT to pursue music education as their first choice.

Music education classes usually cap enrollment because of the limited number of instruments. For every “backup” student, that means there’s one fewer spot for someone who wants to be there.

If you want a backup, consider majoring in performance and minoring in an outside field. I minored in Spanish, and I think that helped me land at least one of my post-grad jobs.

Should You Major in Music Performance?

Here are some options to consider before deciding to major in performance or not.

The most obvious thing you can do with a performance degree is work as a performer. You can play in an orchestra or a chamber group. And you can also play as a soloist.

While a performance career is very competitive, the internet has opened up a lot of other performance opportunities.

Musicians today can use the internet to release their recordings and build a following. We can then use those recordings as a portfolio. Gain a big enough following, and you will have an audience that wants to see you perform.

Perhaps you want to teach, but you don’t want to be a band director. That was me, and that’s why it made more sense for me to major in music performance.

As a flutist, I teach flute and piccolo. I also have a slew of recorders and tin whistles, so I can teach those instruments.

And because I took piano for years, I have enough skills there to teach basic piano.

If you want to teach music to individuals or small groups, a degree in performance will give you the skills to teach your instrument.

The skills you learn when you major in music can apply to other careers. You can work in music administration or do something unrelated to music.

I love using my skills to write about music.

Some musicians use their skills to form chamber groups or manage social media for clients. If you have another interest, you can probably relate it to music and use that to create a niche for yourself.

Majoring in music isn’t a decision to take lightly. Music degrees aren’t easy, but they can be rewarding. Still, you should choose the degree that best aligns with your goals.

For aspiring band directors, that means majoring in music education. And for musicians who don’t want to teach in a school, performance is a better option.

But don’t forget about general music or other music fields.

No matter your concentration, do you want to teach music lessons? Download the Where to Teach Workbook today!

2 thoughts on “Should You Major in Music Education or Performance?”