Disclosure: This post contains affiliate links. I was not given this product, I just like it and want to share it with my readers. All opinions are my own. Please see my privacy policy for more information.
Hey friends! If you have not read the first part of this review series, check it out here! Today is the second installment of my series of reviews of Trevor Wye’s Practice Books for the Flute. As you can probably tell by now, it is not a weekly series, more like monthly. I have been working with the second book a little more lately, and so I thought now would be the perfect time to review it. 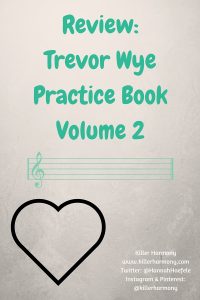 The second volume, titled Technique is just that: a book of exercises to help your technique. It is full of scale patterns similar to those by Taffanel and Gaubert: two other big flute writers. I first started working on it just this semester after I purchased the Omnibus Edition of Volumes I-V over winter break.
The book has scale patterns in a couple of different formats. First it has scale patterns in major that repeat chromatically going up through the range of the flute. This first part of exercises in the book look like one long exercise. Then these exercises are redone in minor. The second way that the exercises are formatted is in single measure chunks with repeat signs. In both cases, there are two patterns: one that starts on the tonic of the current key and one that, as a transition to the next note, starts on the leading tone. Both formats have multiple pattern variants, and both are in major and minor keys.
The point of the technique book is to improve your technique, but I also like to use it as a continuation of my tone practice. As a serious flutist, I would like to be as good as I possibly can at the flute and its auxiliaries. I have learned that we not only need good tone when playing long notes, but also when playing shorter notes and moving around the instrument.
Tone and Technique should work together as the basis for one’s musical practice and musical building blocks. As I stated above, I have the Omnibus Edition of the Trevor Wye Practice books, that way I have all five together, and I don’t have to worry about losing one or another. Currently, this edition is about $45 on Amazon, but that is less than if you bought all five book separately for an average of $15 per book.
Either way you want to do it, or if you want to buy one or two of the books to test out before committing to the whole thing, consider the technique book. I, personally, wish I had gone for the Omnibus Edition first, but I have it now, so that’s what matters, right? I hope you found my review somewhat helpful and that maybe you will now go and buy the book? (If you are serious about flute, do it!)
Thanks for reading!