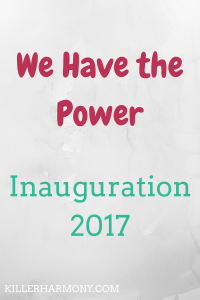 I don’t normally blog about political issues, but since it is a special day, I thought that I would share my thoughts with you about this new era. Trump’s victory was definitely a shock, and while I am not a fan of his, I do hope that he can do some good.

Here are some things to think about with the new administration, whether you voted for Trump or not.

America has its problems, but we are lucky enough to be able to speak up and say what we think. In so many other countries, people are afraid to speak the truth due to the chance of being punished. I think that’s a right that should not be taken for granted.

You Are Not Alone

Many Americans are afraid of what will happen now that we have a new president. I’m afraid, terrified to think of what might happen to me and to many other people. It’s not wrong to be afraid, and it’s not wrong to not be afraid.

Either way, remember that you are not alone. There are people who are afraid of being deported, of not having access to quality medical care, of being forced to wear a badge identifying them based on their religion. You are not alone.

If you do feel like you are alone, you are more than welcome to message me on Twitter or to send me a message through my contact page on here. I want to provide a safe space that is free of judgement where you can be free to be yourself.

Impeachment is Not the Best Option

There will always be people with whom we disagree, and those people will continue to be elected either as president or as a senator or other public office. We can’t just throw out candidates that we don’t approve of, especially because that will only cause more polarization between the two main political parties.

There is Power in Numbers

The president only has so much power. Trump will need to be able to work with the other branches of government to make stuff happen. Now, with a Republican controlled congress, that will not be too difficult. But, Trump will not be the only person in power.

I’m not going to say that congress will block Trump’s ideas to build a wall or revoke Obamacare or whatever else he has promised to do. What I will say is this: the power is distributed between numerous people, and we have power in numbers.

We Need to Educate Ourselves

Now is a great time to be alive and an even better time to be a young person, because we have access to the internet. We can learn almost anything at the touch of a button. With voice assistants, we don’t even have to type anything.

If you are unhappy with the election results, for the president or otherwise, you have the ability to learn about the candidates and the issues and to contact the appropriate officials when you want your voice to be heard.

There will be an election in November 2018, and while it will not be for the president, it will be for various representatives and senators. You have the power to vote for the people you like and against the people you do not like. (Provided you are 18+, of course)

We Have the Power

We have the power to make change happen. If enough people want to see something change, and enough of them act upon it, change will happen. As Americans, we have the ability to elect the people who run our government. We don’t have to deal with a one party rule or another system we have no control over.

We have a voice, and we need to use that voice to our advantage. The recent election can be taken as a learning experience. It goes to show that even with the electoral college, every vote counts. There is no such thing as a safe election. We can’t rely on other people to speak up for us; we have to take charge.

If there is one thing that I have learned from this election, it is that anything can happen. Change is inevitable, good even.

Did you vote in the election? How do you feel about the new administration? Let me know in the comments or on Twitter (@HannahHaefele).