As a music major, I had to play music…a lot. During my last year of college, I was in three large ensembles, one medium chamber group, and I played three other smaller chamber pieces.

I also played solos quite a bit, both with and without the piano. In fact, two of my recital requirements were an unaccompanied piece and a chamber piece. 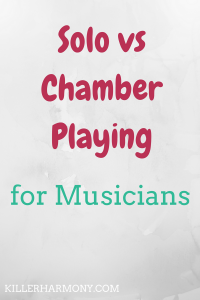 Now, I play with a local flute choir and have begun to get involved with music at a local church. There are some similarities and differences when it comes to solo and chamber playing. Both are important to musical development, and you can learn different skills from each.

So, here is my take on these two equally different, equally important genres of music. Solo vs chamber playing!

Playing a solo, accompanied or not, is hard work. Not every musician will do this, but most serious musicians have played solos before. Solos are the pieces that high schoolers play to audition for their state band. They are the backbone of an instrument’s repertoire.

Solos give musicians the chance to let their creativity shine. They let us bring to light a composer’s vision without having to discuss anything with collaborating artists.

There are all sorts of solo genres out there. The most famous is probably the concerto. This is where a soloist is accompanied by an orchestra. You can also find sonatas for a solo instrument, or sometimes for two.

While those are some of the common types of solos, any piece where a musician has the main melody and is not playing with a few other musicians counts as a solo.

If you have to play an audition for a music group or for entrance into college, solo music is your best bet. Most audition committees will not want to hear a second violin part or a fourth trumpet part.

The term chamber music comes from where the genre originated: a chamber, or room. Chamber music started out in small venues and only a few musicians would play. Now it has become its own genre, and we still play music in this way, just on a bigger stage.

One of the best parts of chamber music is getting to work with your fellow musicians to combine everyone’s ideas. You aren’t (usually) at the liberty of a teacher or director. You get to decide where to get louder or when to take a piece a little faster.

This past year, I played a few flute duets with my professor, and while I enjoyed them, I also liked playing with my peers. I was part of a flute quartet, and I also played a duet with a friend who plays bassoon.

When I worked with my fellow students, we were able to have a discussion about the piece. Our professors were able to give us feedback, but the piece was up to us to work on and perform.

Of all the possible group projects you could have in school, I think chamber music is the best.

One or the other?

Do you have to choose between solo and chamber playing? Absolutely not!

I think that some people tend to be stronger in one area, but that doesn’t mean you can’t do both. There are some things you can only gain from solo playing and others from chamber playing.

Being able to play both solo and in a group means you will have more chances to play and perform. You can share your music with more people, and you can learn about more wonderful works.

Chamber music can teach you team work skills, and solo playing can give you confidence in front of crowds. Small group work is almost inevitable no matter the career you pursue. A reasonable dose of confidence will make you believe in yourself a little more, again, no matter what you do.

Before I state what I prefer, I have to disclose that this is just my opinion. I love both solo and chamber playing, and I would not give up either of them. So, without further ado…

Why? You ask. Well, there are multiple reasons. 1) I can be controlling and a perfectionist. Solos allow me to rely only on myself. 2) I played piano first. While plenty of pianists play with others, I never did. I was always playing solo music for piano. 3) I’m a Leo. If you happen to believe astrology, Less are confident and like center stage. Such is life, I guess.

And just because I prefer solo playing, that doesn’t mean I hate chamber playing. I do love playing with others. It’s just that solo playing is a slight preference I have.

My preference could also depend on the music. I would rather play a French-romantic duet with bassoon than an unaccompanied flute piece that uses microtones. (no offense if you’re into that… :P)

There are a lot of things to consider when it comes to the debate of solo and chamber playing. I don’t think there is a clear winner. Each person is more than able to have their preference.

If you prefer one or the other, which one is it? Why do you prefer it? Let me know in the comments!