Oh scales. The bane of many musicians’ existences. But, knowing how to practice scales is actually really important. 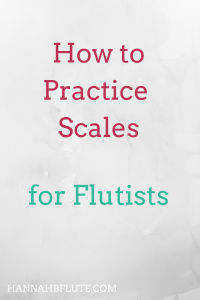 If you can’t practice scales well, it will affect how much music you can learn. It will change how you learn music, too.

So, how do you practice scales?

To put it simply, scales are the backbone of music music. Any tonal piece of music revolves around a key and that key’s corresponding scale.

Scales also make up a good chunk of the melody in some pieces.

The flute also has a C major scale, and so do other instruments.

Major scales, like the C major scale, are pretty common in music. Most pieces in major keys will use the scale at some point.

They sound happy and upbeat, and that’s what gives major keys their pleasant sound.

Minor scales are based on major scales. They have three types, and each minor scale has a relative major and a parallel major scale.

If you compare that to the major scale, the intervals are the same, but it starts in a different place.

The harmonic minor scale is similar, but there are a couple of important changes. Instead of the final interval being a whole step, it’s a half step.

And to make up for that, the second to last interval is a whole plus a half step.

Another popular scale is the chromatic scale. This scale involves all 12 notes of the western musical scale. That means you’ll play all while and black keys on a piano, in order.

The whole tone scale is similar to the chromatic scale, except it uses every other note out of the 12. Its only interval is a whole step, so you skip one note each time.

There are two iterations of this scale, but it might start on different notes. The iterations include:

Why Should You Practice Scales?

If you can’t practice scales, it will make it much harder for you to learn new pieces of music. You’ll take longer to learn the same amount of music than someone who can practice scales.

Knowing how to practice scales is an important part of advancing as a musician. If you go to music school, you’ll probably have to play a scale or two for your auditions.

As I said earlier, scales are fundamental to almost all music. A lot of warm up exercises use scales as their base.

Being able to practice scales can help you warm up more efficiently. That’s because you can cover multiple elements.

If you practice scales slowly, you can work on your tone as well as your knowledge of various scales.

Learning how to practice scales can take some time. So don’t feel like you have to learn everything at once.

If you get into more recent music, that number might increase. Or it might go away, with atonal music.

Whether you’re in music school or just like to play in multiple community ensembles, you might have a lot of music to learn.

And odds are good that you don’t have that much time. So, you need to streamline your practice.

How to Practice Scales

Do you want to practice a major scale? What about minor scales? And you can’t forget your chromatic or whole tone scales.

Before you can practice scales, you have to know which you want to practice.

Of course, you can (and should) practice multiple scales. If you have time, it’s not a bad idea to run through as many scales as you can.

For now, let’s use C major as an example.

If you want to practice scales, you have to know what key each is in. C major is easy; there are no sharps or flats.

For piano players, this means playing only white keys. Other musicians will have to figure out which notes/fingerings constitute C major.

Flutists can play C major by starting with the low C (the two primary footjoint keys) and removing one key at a time. The exception is that you’ll remove both footjoint keys at the same time.

Now, if you play a transposing instrument that doesn’t sound like how it’s written, you have another thing to consider. Do you want to practice the written key or the sounding key?

In both cases, you should know how the scale relates between what you see and what you hear.

Next, plan out how many octaves you plan to play of your chosen scale. Pianists have a huge range, so it’s not uncommon to practice two to four octaves of a scale in one go.

As a flutist, I can play up to three octaves of the C major scale. Other instruments may have a smaller or larger range.

Part of knowing how to practice scales is knowing what you can and can’t handle.

If this is your first time learning to practice scales, take it slowly. You want to make sure you play the right notes.

While you may want to show off your skills, you don’t want to miss half of the notes just so you can play a bit faster.

Think of how fast you can play the most complicated part of the scale. Base your entire tempo off of that.

As you practice scales more, you can slowly increase the tempo.

Once you learn how to practice scales, you should start to practice arpeggios. Arpeggios are broken chords based off of the scale.

For example, a C major chord utilizes C, E, and G. If your instrument can play multiple notes at a time, you can also practice the chord.

But if not, you can play the arpeggio. That means playing C, E, and G in succession.

How do you like to practice scales? Do you have any special tricks? Let me know in the comments!