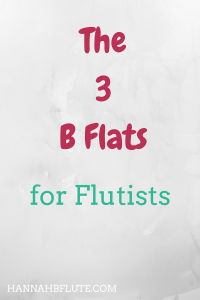 Knowing the three fingerings and each one’s purpose allows you to make an informed decision on fingerings when playing through a piece. The 3 B flats are what we are going to talk about today.

What are Alternate Fingerings?

Almost every instrument has different ways of playing the same note. The flute is no exception. A couple of notes on the flute have alternate fingerings that serve different purposes.

Some are helpful in faster movements, and others are useful when moving between certain notes.

Alternate fingerings are just that, alternative ways that a musician can play a certain note on their instrument.

The most common note on flute with alternate fingers is the first and second octave B flat and A sharp.

The Long B Flat

The Thumb B Flat

The B natural thumb key is used more often than the B flat thumb key, so it can be hard to learn when to use each one.

The Lever B Flat

I just started using the B flat lever fairly recently, but it is incredibly helpful. It is great for chromatic scales and passages. The long B flat can be slightly flat, and the lever avoids that. It depresses the same keys as the B flat thumb key, but it allows for an easy transition to B natural or C flat.

The B flat lever does not use the F key, like the long B flat. Excess keys pressed down can change tuning ever so slightly. That is one of the faults of the long B flat with the lever makes up for.

The thumb B flat is perfect for fast runs and scales in flat keys, but it doesn’t work when there are B naturals in the key signature. It doesn’t always work, but it is a great tool when it does work.

The lever B flat, while the least common, is useful in slower chromatic passages. Intonation is more noticeable in slower music. Since the lever is not as quick and easy to use as the other two fingerings, slow music is where it shines.