Saint-Saëns’ Volière. Mendelssohn’s Scherzo. And for piccolo players: Rossini’s Semiramide. These excerpts all involve fast notes and a clean articulation. If you want to play these solos successfully, you have to know how to double tongue. 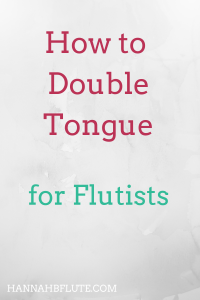 Tonguing is part of life as a flutist. And being able to use your tongue in different ways will help your technique and playing ability.  If you’re sick of having to play things under tempo, you have to learn how to double tongue!

As a flutist, I use my tongue a lot…that’s why they say flute players are good kissers. Unless you want all of the notes you play to be slurred, you have to use your tongue.

Tonguing of any kind is how you separate notes on any wind or brass instrument. The first way you learn to tongue is called single tonguing. You make one motion with your tongue to differentiate notes.

On a string instrument, you articulate notes with the bow or with your fingers. Pianists articulate with their fingers and the way they press the keys.

But if you play a wind instrument, your tongue is at the center of the instrument’s articulation.

As a beginner, you start off with single tonguing. You use the tip of your tongue to articulate the notes.

But you can only single tongue so fast. If you want to play faster or create a different effect, you can use double tonguing.

Whether single or double, we have to think of different syllables to produce the right articulation. Thinking of syllables helps you position the tongue in the right place, and you should start off that way to develop good habits.

If you aren’t confident with single tonguing, I HIGHLY recommend working on that before you start double tonguing.

To single tongue on the flute, think of the letters T or D. The exact syllables can vary. You can think of ta, te, ti, toh, to, etc. Same with D: da, day, di, doh, do…

If you have a tongued passage that’s particularly fast, you may not be able to use single tonguing. Double, and even triple, tonguing can help you get a clean sound even at a faster tempo.

Both double and triple tonguing involve a combination of T and D syllables with K and G syllables.

T and K are typically paired together, and same with D and G.

If you want a more staccato sound, you should use T and K. D and G are better for softer, or more legato passages.

To double tongue, you simply alternate between T and K or D and G syllables.

Triple tonguing is similar, but for now, let’s focus on how to double tongue. Let me know if you want to know more about triple tonguing.

Why you need to double tongue

I already mentioned the most common reason for double tonguing: tempo. Unless you have an amazingly flexible tongue, you can only single tongue so quickly.

If you know how to double tongue well, you can use that skill to learn new things and explore new pieces.

How to Double Tongue

Now that you know the basics of tonguing and why it’s important, it’s time to learn how to double tongue.

Before I share my tips, I want to suggest that you work with a teacher. Yes, you can learn flute online through blog posts and videos. But with something like double tonguing, a teacher can watch you and identify your weak spots.

That being said, here are some of the basics for how to double tongue.

Earlier, I mentioned a few syllables you can use when double tonguing. Syllables based on T and D are produced with the front of the tongue, and they’re great for single tonguing.

To double tongue, we need to pair those syllables with some based around the middle or back of the tongue. K and G are the most common for this.

You can use almost any vowel sound with any of these consonants to produce a double tongue.

However, you can’t pair any consonant with another. T and K are great for staccato and accented notes, whereas D and G are softer and better for legato notes.

Since your tongue gets a workout from tonguing, strengthening it is an important step to learning how to double tongue.

To practice your double tongue, experiment with different consonants, vowels, and combos of the two.

There are tons of vowel sounds you can use. Here are a few:

The list goes on. You can match those vowel sounds with the different consonants when tonguing. Switching between different vowel sounds can change the mood and timbre of your playing.

And in longer passages, it can keep your tongue from feeling fatigued.

Back of the tongue

When you start learning how to double tongue, you’ll probably have a good grasp on the T and D syllables at the front of your tongue.

However, the back of your tongue will need some work and practice. The K and G syllables can be hard to produce consistently, especially at first.

Of course, you want to differentiate the T and K or the D and G. Make sure you place those Ks and Gs far enough back that you can make a double tongue. But don’t place them so far back that you can’t produce a good sound.

Play your scales, etudes, and even pieces in this way. That is one of the best ways to practice how to double tongue.

Now that you’re working on a new skill, you have to add it into your practice routine! Part of learning how to double tongue is working on it every day, like your scales.

And part of maintaining your skills and mastering how to double tongue involves regular practice. You may not have to practice it every day, but you should still work on your double tonguing.

Luckily, you can practice double tonguing with just about any exercise or scale. If you need some help getting started, Trevor Wye’s Practice Books for the Flute are an excellent resource for all of your flute playing.

The articulation book is perfect for tonguing, but the technique book is another great place to start.

Do you have any other questions about how to double tongue? Leave them in the comments, and I can try to answer them. If I can’t, then I would recommend working with a private teacher in person or online!