Growing up with seizures, I had regular doctors appointments, daily medications, and a few inpatient hospital visits. Stress and feeling sick were triggers for me. Little did I know that for some epilepsy patients, music causes seizures. 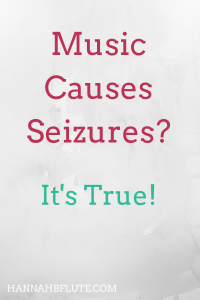 Ever since I first heard of musicogenic epilepsy, I’ve been curious about the ins and outs of it. What are the symptoms. How does music cause seizures? What type of music can cause seizures?

Before talking about how music causes seizures, I want to talk about seizures themselves.

A seizure occurs when electrical activity in the brain “excites or inhibits” other cells in the brain. Typically, your brain is able to balance the level of activity, but chemical changes in the brain can throw off that balance.

But there’s a bit more to it than that.

These misfiring can cause a variety of symptoms. Aside from losing consciousness, you can have difficulty talking or breathing, or your heart rate could increase.

One time or more?

Seizures can be one time events, or they can occur multiple times. Recurrent seizures can lead to a diagnosis of epilepsy which is synonymous with seizure disorder.

If you have two or more seizures with no clear cause, then an epilepsy diagnosis is likely.

An epilepsy diagnosis is nothing to be ashamed of. Many people can treat it, and it can be easy to live with.

Of course, not everyone is that lucky. However, don’t freak out if you have a seizure or if you end up with a diagnosis.

Plenty of things can trigger a seizure. Some common triggers include lack of sleep, fevers, flashing lights, and stress.

Everyone has different triggers. Some of my biggest triggers have been stress, a fever, and lack of sleep.

In fact, some people have reflex epilepsy. That occurs when specific situations trigger a seizure. Bright lights can cause a seizure.

Another type of reflex epilepsy occurs when music causes seizures.

As someone who has loved music and played it all of my life, I can’t even imagine what it would be like if music triggered my seizures.

But it’s true. For some people, music causes seizures.

Whether you’re a musician or not, you probably listen to music on a weekly or even daily basis.

But imagine having a seizure at the sound of a Beethoven symphony or a Beatles hit.

Even certain notes, like a G-sharp in one specific octave, can trigger seizures. Timbre can also have an effect on whether a seizure will happen. String, woodwind, and brass instruments all have different timbres that can trigger seizures in one patient but not another.

Some patients also mention specific composers whose music is a trigger. Listening, playing, and even thinking about music causes seizures in some patients.

On the other end of it, music can cause a variety of different types of seizures.

Musicogenic epilepsy is a form of reflex epilepsy. However, not much research has been done on it. And the electroencephalogram (EEG) doesn’t regularly test for it like the more common photosensitive epilepsy.

One thing that can make testing for musicogenic epilepsy more difficult is the many forms in can take. Photosensitive epilepsy can be tested for with light stimulation.

On the other hand, you would have to play dozens of tones, different timbres, genres, and composers to give a complete test.

Another potential pitfall of testing for musicogenic epilepsy is that it can have a delayed onset. Light can trigger a seizure immediately, but seizures with music as the trigger can take a while to appear.

Fortunately, musicogenic epilepsy is rare. It affects roughly 1 in 10,000,000 people. However, it could be slightly more common.

While music causes seizures for some patients, all hope is not lost. For many epilepsy patients, music will never be a problem. In fact, music can help people with epilepsy.

The brains in those of us with epilepsy react to music differently than other people. That means that music can be a potential therapy for epilepsy patients (as long as music isn’t a trigger).

As a musician with a lifelong epilepsy diagnosis, the connection between the two is fascinating. I’m lucky enough to have my seizures under control, but medication will always be a part of my daily routine.

And I’m also lucky that music doesn’t trigger my seizures. I can play and listen to music as much as I please. However, I know that some people aren’t so lucky.