Playing the flute is super fun, and people young and old love and benefit from it. But not all of us have the means to find a flute to learn on. That’s one reason why world flutes are amazing! 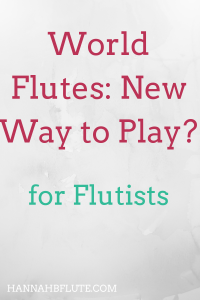 World flutes are usually cheaper and easier to find than the typical student flute. So if you’re on a budget and want to start playing music, give a world flute a try!

That’s the pretty silver instrument you see at the front of a concert band.

But there’s a lot more to the story. Of course, the western concert flute plays a huge role in the world of flutes. However, it’s not the only flute that matters.

There are two main types of flutes: side-blown and end-blown. Flutes make a sound either by blowing across an edge or into a tube with a fipple.

If you’ve ever listened to concert band or orchestra music, you’ve probably heard the flute. The flute is a higher pitched instrument, and it can sound like a bird.

Its range starts around middle C (depending on the exact flute), and it spans about a three octave range.

This family of flutes also includes instruments like the piccolo and alto flute.

Unfortunately, the recorder has received a bad reputation. It’s often the first instrument you play in elementary music class.

Unlike the western concert flute, the recorder doesn’t have keys, so you have to use your fingers to cover the holes. Different combinations of holes will produce different pitches.

Another difference is that the recorder is an end-blown, or fipple, flute. You hold the instrument in front of you, and you blow in one end. That end has a block, or fipple, which is where that name originates.

The soprano recorder is common in elementary school, but there are many others you can play.

Some might consider the recorder one of many world flutes, but I’m not sure I agree. It’s definitely outside of the family of western concert flutes.

However, it has just as long of a history as the western concert flute. It also had quite a heyday in the Baroque period where it was used in a lot of western classical music.

That being said, I wanted to include a bit about the recorder. It’s an affordable option for both new beginners and experienced flutists looking for a new challenge.

Aside from the western concert flute and recorder, there are many world flutes. Some of these world flutes are relatively affordable, and you can start playing them in no time.

What are World Flutes?

World flutes cover any type of flute that doesn’t typically show up in western classical music. Music exists in almost every culture on the planet, and music needs instruments.

Just as in classical music, many genres of world music include world flutes. Some of these flutes are side-blown, like the western concert flute. Others are end-blown, like the recorder.

One of my most cherished instruments is a Native American flute. These flutes look similar to recorders, but there are plenty of differences.

One main difference is that the block is more prominent on Native American flutes. Many of these instruments have special designs on their blocks, like birds.

Native American flutes have five or six holes, and the tube is cylindrical throughout most of the instrument. These flutes typically don’t play chromatic notes so dedicated players usually have multiple flutes in different keys.

If you grew up playing Legend of Zelda, you’ve probably heard of the ocarina. It’s a small flute that looks like nothing else. Thanks to its popularity, the 12-hole ocarina is the most common.

However, there are other types of ocarinas. Some have a few as 4 holes whereas others have 8 or 10 holes.

The 12-hole ocarina can play chromatically, and it has a range of just over one and a half octaves. I’m not as well-versed about other ocarinas, so I can’t speak about their ranges.

Other flutes from the Americas

You can find many world flutes from South America, like the quena (or kena) and the tarka. So if you like South American music, there’s probably a flute out there for you!

You may or may not consider Irish music to be world music, and either’s okay. However, the tin whistle is an Irish flute that one could consider a world flute.

It looks like a super thin recorder. You hold it in front of you, and you blow through the hole and fipple at one end. Tin whistles have six holes and no keys. Their range is about two octaves, and its lowest pitch is the same as on a piccolo.

Because of its small size, you can play duets with yourself! If you have two tin whistles in the same key, you can blow into both of them at the same time and produce different notes. However, playing this way does limit your range since you can’t close all of the holes on both whistles.

The shinobue is a transverse Japanese flute. If you already play the western concert flute, then you won’t have to worry about learning a complete new embouchure.

It has seven holes instead of six, and that extends its range quite a bit. The lowest note is a Bb, and it can go a lot higher than that.

Other flutes from East Asia

Some other East Asian flutes include the taegum (Korea) and the donglim (Tibet). Many East Asian countries and regions have one or more flutes. So if you’re interested in that music, you have a lot of options available.

A common deterrent to playing an instrument is that they’re expensive and hard to buy. Luckily, many world flutes are more affordable and easier to get.

Some recorders and tin whistles cost less than $10 each. Ocarinas average about $20. Of course, some world flutes are more expensive.

Native American flutes cost about the same as a western concert flute.

If you decide to learn a world flute, the same shopping tips apply. Make sure you get a quality instrument and don’t fall for deals that are too good to be true.

One of the benefits of many of these flutes is that they don’t have a complicated mechanism. While that does mean these instruments can’t play chromatically, it does make it easier to learn.

Of course, world flutes allow you to play music from around the world. However, they’re great if you can’t seem to get the flute embouchure right off the bat.

Since many of these flutes are end-blown, you don’t have to worry about forming just the “right” embouchure. All you really need to do is form a good seal around the mouthpiece.

Have you tried (or wanted to try) world flutes? Let me know!