I’ll be honest. The first flute that I owned was a cheap, no-name flute from Amazon. My parents got it for me for Christmas, and I loved that thing. But eventually I started to wonder…are cheap flutes worth it? 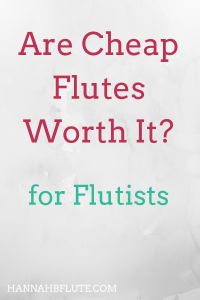 After all, I had to upgrade to a more reliable student flute just months later.

Luckily, I wasn’t a complete beginner when I got that flute. I was able to borrow my band director’s old flute which was a Bundy. It wasn’t the best, but it also wasn’t the worst.

On social media (Facebook groups, specifically), I see a lot of people asking about these cheap flutes. Many of these people are from third world countries and/or they just don’t have a big budget.

I get it. Not everyone has a thousand dollars to drop on something that they may not like. However, that’s no reason for choosing a cheap, no-name flute over one from a reliable, well-known flute company.

When you look at every flute available, you could argue that even $10,000 is cheap. Some flutes cost more than 50K.

But obviously, those flutes aren’t cheap.

If you’re looking for a cheap instrument, odds are you’re a beginner. So you probably don’t want to spend a ton on something before you know you like it. And I can’t blame you.

You can find some really good quality flutes for a great deal. On the other hand, there are some horrible flutes that cost way too much.

The thing about no-name flutes is that a lot of them have some sort of brand name. I won’t list any names, because I don’t want to encourage ANYONE to buy them.

But one quick search on Amazon will reveal all sorts of flute “brands.”

Unfortunately, these brands don’t have a reputation for producing high-quality instruments. And flute technicians won’t even touch the flutes.

That’s because a lot of the flutes use super cheap materials, and the way they make them is super cheap.

Some people call these flutes “disposable flutes” or “flute shaped objects.” Stay away from these types of instruments, flute or otherwise.

Now, that’s not to say that every flute under $400 is a bad flute. You can find plenty of used flutes from reputable companies.

Yamaha, Gemeinhardt, Pearl, Trevor James, and Jupiter all make great student flutes. If you look at the used market in your area, you can probably find one for a great deal.

Just be sure that the flute is from that company and not a fake. Unfortunately, eBay sellers have been known to take no-name flutes and add a brand label.

Are Cheap Flutes Worth It?

In short, no. Cheap flutes are NOT worth the hassle of buying them, trying to have them repaired, and then shopping for a better flute.

You may save money now, but you’ll waste money and time in the long run.

Since no-name flutes typically use cheaper materials, they won’t last nearly as long as a flute from a reputable company. I’ve heard of many people keeping their Gemeinhardt flutes for over 30 years, and the flute still plays.

That’s not the case with no-name flutes. Some don’t even last 30 days.

Another problem with the materials in cheap flutes is that the flute can’t be repaired. If something breaks or goes out of adjustment, many repair technicians won’t touch the instrument.

The cost of the repair is often greater than the value of the instrument. You don’t want that.

Are cheap flutes worth it? Well, do you want a flute for decoration?

While you *can* play these flutes until they encounter mechanical issues, it’s not worth it.

If you really can’t afford a new flute but want to play, then buy a used flute. You can start with a local music store or go online to a flute specific shop.

Facebook Marketplace is another great place to search for instruments, but you should ask a flute player or teacher for help when it comes to deciding on an instrument.

You can also ask around your community to see if anyone is selling a student flute. Many people sell their old instruments as they upgrade.

Even Amazon can be a good place to find flutes. Just make sure you get a brand name instrument.

Too Good to Be True

There’s obviously a good reason why these flutes exist. They’re super cheap. And the companies that make or sell them know that people don’t always want to pay full price for a flute.

Are cheap flutes worth it? You might want to believe they are, but they just aren’t.

When you buy a brand name instrument, you know it will last for quite a while. Whether you buy it new or used, you will get a sturdy instrument.

However, cheap flutes entice you by being super cheap. They’re often less than $100.

But as soon as you know it, that flute won’t play well. It may need repairs that can’t be done.

Or worse. The flute could hinder your growth as a musician.

Sooner or later, you’re gonna have to look for a new flute. So save yourself the time and money and look for a better instrument now.

Invest in a good instrument

Sure, the price tag will be higher. But a good instrument won’t require repairs after just a few months.

And you can take it in for repairs when they are necessary.

Maybe you just don’t have the money right now. Are cheap flutes worth it at all?

If you don’t have the money to buy a reliable flute, consider renting. Check out your local music store, and ask if they have a rental program.

Many music stores have an option where you can rent an instrument and then pay it off (therefore own it) after a few years.

If you love it, then you can pay for it over time. Or if you end up wanting to switch instruments, you don’t have to worry about selling the instrument.

Rentals usually start at $20 to $30 a month depending on the instrument. Even as the cost adds up, that’s a much better choice than a no-name flute.

How do you feel about said no-name flutes? Are cheap flutes worth it?

If you want to get a flute that will actually suit your needs, be sure to download my free flute shopping checklist. Just subscribe below, and you’ll get access to it and all of my free downloads!