As a flute player, you probably hear a lot about the flute embouchure. It must be centered for you to get a good sound. 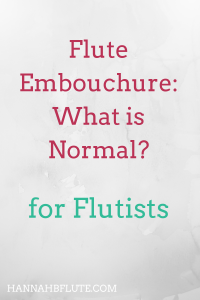 Right? But what if you can’t get a good sound when you play in the center? Are you destined to play another instrument?

Don’t worry, you don’t have to give up on your flute dreams. Because, there’s no “normal” flute embouchure.

What is the Flute Embouchure?

A flute embouchure is the position your lips need to form to produce a sound on the flute. Every woodwind and brass instrument has its own embouchure.

All brass players buzz their lips against a mouthpiece.

Clarinet and saxophone players form their embouchure around a reed and mouthpiece. Oboe and bassoon players put their lips around two reeds.

However, the flute embouchure is a little different. Of course, it still involves forming your lips a certain way.

A common way to explain the flute embouchure is to equate flute playing to blowing into a pop, or soda, bottle.

If you’ve ever blown into a bottle, you have a good idea of what it feels like to blow into a flute. You have to blow into and across the opening at the same time. Neither is easy.

However, there are still some tiny differences between a bottle and a flute.

The embouchure hole on a flute is usually smaller than the opening of a bottle. Also, the shape is usually more oval or square, rather than circular.

Another simple way to explain the flute embouchure is to imagine you’re spitting rice. Think about if you placed a grain of rice on the tip of your tongue, and you want to spit it off.

How do you need to form your lips? While it’s not identical, that also gets very close to the flute embouchure.

Of course, it’s still not the same. However, it’s an excellent visualization.

If you have played or wanted to play flute, you might have heard people talk about the normal flute embouchure. But the truth is, one embouchure isn’t better than another.

Every flutist has a slightly different embouchure, because we all have different lips. I have a pronounced Cupid’s bow, so if I tried to play with my flute in the middle, I wouldn’t make a sound.

But, let’s look at what some people may consider the “normal” flute embouchure.

Most flutists play with their flute centered on their bottom lip. For many of us, that position makes sense.

You can use muscles on both sides of your lips to form a good flute embouchure.

Unfortunately, not everyone can play this way. If you’re like me and have a Cupid’s bow, you may need to play slightly off to one side.

Of course, you probably don’t want to play extremely off to the side.

But this myth that we have to play in the center is pretty damaging. Consider those elementary band parties.

Beginning band students get to try the various instruments, like flute, clarinet, trumpet, and trombone. At least in my district, someone would rank your aptitude for each instrument.

I believe you could pick whichever instrument you wanted, but the score sheet definitely steered you. As an impressionable 10 year old, it could make you choose an instrument you didn’t care for just because you happened to get a sound on it.

Now, regardless of where you place you flute on your lips, you want to play with one air stream. It may sound obvious.

However, for those of us with an “abnormal” flute embouchure, it’s essential to make sure we have a single stream of air.

It’s not that I’m a bad flute player. I just need to do things a little differently.

No such thing as normal

As I mentioned earlier, no two lips are the same. Even if you do play in the center, your embouchure is probably going to look slightly different than someone else’s.

It’s all part of our anatomy.

I’ve talked a bit about my own flute embouchure. But I want to go into more detail. I want to break the stigma surrounding embouchures.

So, here are some more juicy details about my flute embouchure.

If you took a look at your top lip, you might think it looks like a bow (like in a bow and arrow). You might have a couple of “peaks” near the middle of your top lip. And there may be a small valley between them.

A Cupid’s bow is nothing to be ashamed of. And neither is the lack of one.

But having a prominent Cupid’s bow does require some flexibility in where you place your flute.

Off to the side

Since placing my flute in the middle of my lips doesn’t work, I have to place my flute off to the side.

Now if you didn’t know, I actually started playing flute at age 16. No teacher. No band director to help.

It was just me. So while that could be seen as a downfall, it allowed me to experiment and find the right embouchure for me.

I didn’t have any preconceived notions of a “proper” flute embouchure. If I did, then I probably would have been very frustrated. I might have even given up on flute.

Because of my embouchure, I do have to work a bit harder. My tone has always been my biggest weakness as a flutist.

But I’m working on it. And I can tell my tone has improved a lot over the past few months.

My playing, and specifically my flute embouchure, will always be something to work on. It will be a while before it’s “perfect.”

But I’m okay with that.

Do you play off to the side? Or do you play in the center? How did you learn to form an embouchure? Let me know in the comments!