With a new school year right around the corner, now’s the perfect time to learn a second instrument. But you can’t just use your current practice routine on a new instrument. 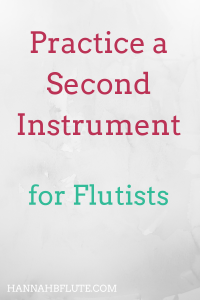 No two instruments are exactly alike. Each one deserves time and attention.

But why should you learn another instrument when you’re already busy enough? And how do you balance it all?

Why Play a Second Instrument?

Or your second instrument could also be unrelated, like say, flute and piano.

And the most common reasons for both scenarios vary. If you play two closely related instruments, it can help you get performance or teaching jobs.

However, playing a second instrument that’s unrelated can also allow you to play in a variety of ensembles.

Marching band is probably the most common reason why students play second instruments. If you play oboe, bassoon, or French horn, sorry, you can’t play your primary instrument in marching band.

Double reeds are too fragile for marching. And the French horn projects sound backwards, which can get lost on a huge football field.

But many schools, at least at the college level, require flute players to play piccolo. Let’s be honest, no one can hear the flute on a field. However, the piccolo is high enough to pierce through even the largest brass section.

And if you’re a string player and required to take marching band, you’ll also have to learn another instrument. Because marching band is primarily made up of band instruments.

Similarly to marching band, jazz ensembles can be selective about the instruments they use. If you’re a woodwind player and interested in jazz, consider learning the saxophone.

Of course, flute and clarinet do show up in jazz music. However, they’re not as common, so you might not play on a lot of pieces.

And if you’re a brass player, you’ll want to break out a trumpet or trombone. If your primary instrument is French horn, euphonium, or tuba, you’re going to have a tough time breaking into the jazz world.

Also at the collegiate level, music methods classes will require you to learn different instruments. If you’re a music education major, you’ll probably have to learn the basics of the woodwinds, brass, string, and percussion instruments.

You may have to take a voice methods class, too. And of course, every music major (music ed or not) has to learn some piano.

Next, you may want to learn a so-called auxiliary instrument, or one that’s part of your main instrument’s family. This is most common with woodwind players, like flute players doubling on piccolo or alto flute.

Oboe players might learn English horn. Bassoon players can learn the basics of the contrabassoon.

And saxophone players can also learn all of the common saxophones, from soprano to baritone.

Because you want to!

So if you’re deciding between two potential second instruments, consider what you like and if you think you’ll want to practice and get better.

How to Practice a Second Instrument

However, it can be too easy to let your second instrument fall to the wayside. If you’re limited on practice time, you’ll probably want to focus on your primary instrument.

And that’s totally understandable. But that doesn’t mean you should just go on autopilot when practicing your second instrument.

They say an apple a day keeps the doctor away. Well, I say a practice session a day keeps you on your way (to progress, that is)!

We all have busy days, and you do have to prioritize when your free time is limited. However, you should give your second instrument some priority.

Practicing isn’t always easy, but it’s necessary to achieve competency on any instrument. And unfortunately, you may have to start from scratch when first learning a second instrument.

You can transfer your knowledge of theory, but many instruments have their own set of playing techniques. And yes, that includes instruments in the same family.

Watch the clock (or don’t)

Depending on how you best practice, you may or may not want to look at the clock. If you like to set time-based practice goals, by all means, watch the clock.

However, you may want to just focus on the task at hand. And if that’s the case, don’t look at the clock.

But whether you use a clock or not, you should consider how much time you have to practice. Do you want to spend upwards of an hour on your second instrument? Or do you only have time for half of that?

Some days, you might have more time. But again, remember your priorities so that you can spend your practice time wisely.

Of course, it would be easier to start learning a related instrument. However, it can be easy to miss some small details. For example, maybe a saxophone player wants to learn flute to play in orchestra.

Yes, both instruments share A LOT of the same fingerings. However, there are some important differences. Like F#. On saxophone, you use the middle finger on your right hand.

So make sure you act like a beginner. And if you’ve played your second instrument for a while, then act like a student at whatever level you’re at.

If you want to become great at your second instrument, you should treat it like it’s your first instrument. I don’t mean that you should switch over.

But you should give it the time it deserves. That also means practicing it like you would your first instrument.

Be sure to practice tone, technique, and scales. Warm up thoroughly so that you can practice well.

Practice with a purpose

Yes, you need to practice well to improve on your new instrument. That means putting away all distractions and focusing on the task at hand.

If you can, plan out what you want to practice in a given session. Do you want to work on fundamentals? Maybe you follow that up with an etude.

Or perhaps you only have time for a quick warmup followed by ensemble pieces.

Whatever it is, take full advantage of your time practicing. Regardless of the instrument.

Have you ever had to learn a second instrument? How did you practice it? Let me know in the comments!