If you’re in music school for flute, you may have the chance to choose flute repertoire for yourself. Even amateur flutists will probably have an opportunity to choose their own pieces at some point. Being able to choose pieces is great, but it isn’t as easy as it sounds. 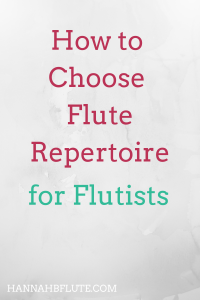 There are many things to consider when you choose flute repertoire, from the performer to the venue. Some pieces are more appropriate in certain situations, so you have to think about different elements before you choose your program.

What Is Flute Repertoire?

Flute repertoire encompasses everything from solo works for the instrument to full orchestral symphonies. Choosing flute repertoire isn’t always easy, but it’s an essential skill to learn as a performer and as a teacher.

Determining the instrumentation you want or have available will help you select the right flute piece for you or your student. That way, you won’t select a work only to find out that there’s no one to play one of the parts.

A solo piece can be good for a studio recital, a jury, or other public performance. If you want the flexibility to perform without a pianist, then choose an unaccompanied piece. Accompanied works are great when you can perform with a pianist.

Chamber music typically involves at least one instrument other than piano, though piano can also be part of the ensemble. Common chamber setups include flute duets, trios, and quartets, as well as wind quintets and other mixed ensembles.

Being able to play in a small group of musicians is a great skill to have. These groups are usually too small to warrant the help of a conductor, so it’s up to you and the other musicians to make eye contact and stay together.

The flute plays an integral role in both orchestral and wind band literature. Along with other woodwinds, flutes add color to the orchestral texture. In a wind band, they take a similar role to the violins, either with the melody or a descant line.

While there are many famous orchestral excerpts for flute, I will focus on smaller scale works for the purpose of this post. Let me know if you want more details on important orchestral works for flute!

One of the most important factors in choosing the right flute repertoire is to consider the level of the player, be it you or a student. If you choose a piece that’s too difficult, it will be frustrating during the learning process. On the other hand, a piece that’s too easy may become boring.

What is a flute level?

There are many systems of “grading” flute repertoire by level. In the United States, a common system is the one by the National Flute Association (NFA). The NFA has released repertoire guides based off of the different levels, and those levels are based on range, key signatures, time signatures, and other techniques.

What level are you?

You can use guides from the NFA or another organization to determine your playing level based on your highest and lowest notes. Also consider what keys you can play in, time signatures, dynamics, etc.

If you’re unsure of your level, ask your teacher or a trusted flute friend. You can work together to figure out what level you are at so that you can choose pieces that fit that level.

Another great way to choose flute repertoire is to consider the time period. Being able to play works of different time periods will show your versatility as a performer, and it can help you get into a music school. Many auditions ask for contrasting works from different periods, so it’s important to know of works for different eras.

To make it easier for you, I created a downloadable guide of some important flute repertoire, organized by period!

You can download it, print it out, and save it for when you need some help choosing flute works. Just be sure you subscribe on the right or at the end of this post to get the password! 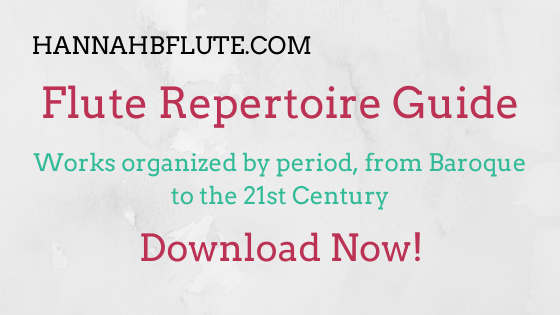 Whether you choose to focus on Baroque music or not, you should still learn some of the most important works from this time period.

But, we make up for it with a lot of great repertoire from the later part of the 19th century.

The late part of the 19th century and the early 20th century brought about a a lot of amazing flute repertoire. You can’t get through a degree in flute without playing at least one piece from the French or Romantic period. And that “French book” includes a lot of great staple works.

However, there’s much more to the era than that blue book. Other works by French composers have also had an impact on the standard flute repertoire.

These works include everything from the Romantic period to today. While a lot of these works aren’t available in the public domain on sites like IMSLP, they’re worth the small cost to own a copy. Also, this period is still going on, and more and more works are being added each year.

That variety means there’s something for everyone. If you think you don’t like contemporary music, give something new a chance. You might be surprised.

How to Choose Flute Repertoire

While the level of difficulty and era of a work can help you choose the right pieces, there are other ways to choose flute repertoire. Considering other factors can help you narrow down your choices. After all, there’s so much music for flute that you’ll probably never play all of it.

Think about what your performance is for or where it will be. The right repertoire for a college recital may not work for a church gig. Thinking about the type of event you’re performing at, the location, and the time of year can help you choose the right music.

Be it you or a student, you have to consider things like playing ability and interests. If you’re choosing a program for yourself, think about where you’re at in terms of playing level. Avoid pieces that are far from that level, in both directions.

You should also consider the music you like. While you may need to have a varied program for a degree program, you should choose pieces you want to play. That way, you’ll be more motivated to practice and improve.

Will you have a pianist for the performance? If you will have to play solo, lean more towards unaccompanied repertoire. That way, you don’t have to play a piece with a missing part.

The same applies to chamber music. If you play in a chamber group, make sure that the whole group will be available before you add a piece to your program.